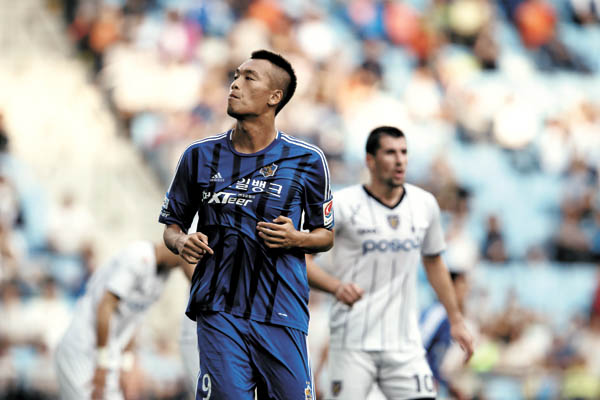 Striker Kim Shin-wook may be thanking his lucky goal-scoring stars as he captures the “Golden Boot” in the 2015 K-League Classic. But his achievement is facing criticism as his team, the Ulsan Hyundai were in the league’s lower group B and his road to the back of the net was paved by weaker opponents.

The 2015 season wrapped up over the weekend and Kim cemented his top status by adding another goal against Busan I’Park in Ulsan’s 2-1 victory on Saturday.

This is the first top scorer title for Kim who made his pro debut with Ulsan in 2009. Kim matched the league best, with 19 goals in 2013 along with then FC Seoul striker Dejan Damjanovic, but he didn’t win the title because he played seven more matches than the Montenegrin forward.

Kim is also the first Korean top scorer in the K-League Classic since former Incheon United striker Yoo Byung-soo in 2010.

Confirming the Golden Boot status, Kim, who is the 2013 K-League MVP, is also one of three MVP candidates for this season along with Suwon Samsung Bluewings’ Yeom Ki-hun, who leads the league in assists, and Jeonbuk Hyundai Motors forward Lee Dong-gook, who played a pivotal role for his team to defend the title. The winner will be announced today.

Despite his achievement, some critics point out that Kim had the advantage over his competitors for the top goal-scoring title as his team was playing in the lower B group of the league while they face stronger teams in the higher A group.

Kim is the first player to win the league scoring title from the team in the lower B group. Ulsan finished seventh, top of lower B group.

The K-League Classic adopted a split system in 2012, similar to the Scottish Premier League. For this season, 12 teams are divided into two groups based on their position in the league after playing 33 matches in the previous season. The top six teams with the most points are placed in the higher A group, while the remainder compete in the lower B group.

Inside each group, the teams will play five more matches to determine the champion and the worst team that will be relegated to the second division K-League Challenge.

After 33 matches, Kim’s Ulsan was relegated to the lower B group, while Adriano’s Seoul and Hwang’s Seongnam qualified for the higher A group.

Before the teams were divided, Kim and Adriano had both scored 14 goals, while Hwang was just one behind them. But after the split, Kim scored four goals in five matches, while Hwang added two. Adriano had just one goal in four matches.

“In the lower group, it’s obvious that strikers will have more chance to score and this gives Kim an advantage,” said Seongnam FC coach Kim Hak-bum. “I think the league should consider giving the scoring title before the teams are divided into two groups.”

Kim Shin-wook, who is known for his power using his 1.96-meter height (6-foot-5), disagreed saying that he has also scored goals against teams in the higher A group and scoring in the lower group isn’t as easy as others think.

This isn’t the first time the selection of the top scorer has drawn concern.

From 2004 to 2006, the league decided the champion by having four-team playoffs, and the local football community questioned whether playoff games should be included in goal-scoring totals. Back then, teams who advanced to the playoffs had a three matches maximum. The league confirmed that goals in playoff matches would be included in players’ scoring tally of the season.

But this changed after the new six-team playoff system was adopted in 2007. Since playoffs can add a maximum of six more games than a team which failed to reach playoffs, the K-League decided not to include playoff games in players’ scoring tally.

“The K-League system has been changed frequently and there has been similar controversy regarding the scoring title before,” the K-League public affairs team said. “Not every system is perfect, but we hope to maintain this split system to make the league more competitive.”