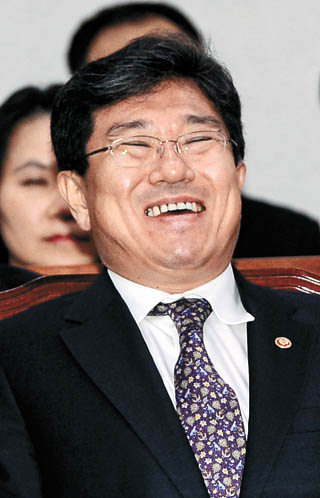 Minister of Trade, Industry and Energy Yoon Sang-jick smiles after the Foreign Affairs and Unification Committee of the National Assembly ratified the Korea-China Free Trade Agreement (FTA) on Monday afternoon. Bilateral FTAs with Vietnam and New Zealand were also ratified at the National Assembly’s general meeting later in the afternoon. [NEWSIS]

The business community welcomed the ratification of the Korea-China Free Trade Agreement (FTA) on Monday, hoping the bilateral pact will help Korea’s faltering exports recover and rekindle growth of the nation’s economy.

A joint committee of business lobby groups, which has been pushing for ratification of the agreement, released a statement after the deal was passed by the National Assembly, saying “the Korea-China FTA will serve as an important opportunity for overcoming the current slowdown in exports and improving economic vitality.

“The business community also has a positive view on the creation of the compensation fund for the agricultural and fishery industries, hoping that it can help improve competitiveness of agricultural exports.”

But others have been less excited about the compensation plan, expressing concerns about the size and management of the 1 trillion won ($863 million) fund intended to support industries expected to be negatively impacted by the FTA. 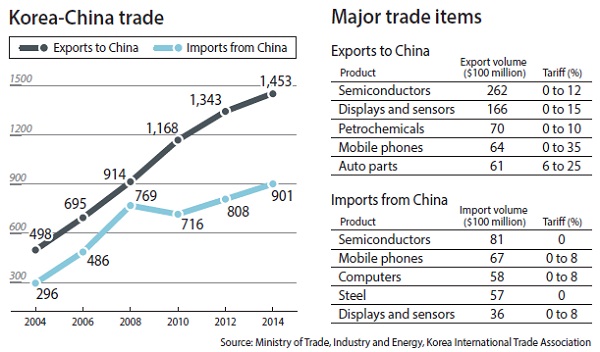 With the ratification of the FTA, Korean businesses could begin receiving tariff cuts on products exported to the world’s largest market as early as next month.

The Ministry of Trade, Industry and Energy said it aims to finish implementation procedures by the end of December in order to help companies benefit from the tariff cuts as soon as possible. The earliest date that Korea can implement the FTA is Dec. 20, but the government is also waiting on China to finish its own procedures.

Under the agreement, the two countries will cut trade tariffs annually for the next 20 years.

In the first year the FTA takes effect, tariffs on 958 products - including aerospace fuel and high-frequency medical equipment like X-ray machines - will be immediately lifted.

In the second year, other aircraft parts and fuels will also be subject to tariff cuts.

The substantive cuts could help Korean businesses gain a competitive edge over their Japanese, European and American counterparts in the Chinese market, because Korea will be the first among the countries to implement a bilateral deal with China. This could potentially lead to a rebound in the country’s exports, which have been falling due to downturns in the global economy.

The Korea Institute for International Economic Policy forecast that the China FTA could add up to $23.3 billion to the nation’s total exports within five years of it taking effect.

The government and several research institutions project that the China FTA will raise the country’s GDP by 0.96 percent 10 years after its implementation, creating around 53,000 new jobs.

However, some trade analysts and lawmakers say the impact of the China FTA won’t benefit Korean businesses much because nine of the country’s 10 biggest export products are already tariff-free.

Current tariff levels will be maintained for agricultural products like rice, meat, vegetables and fruit.