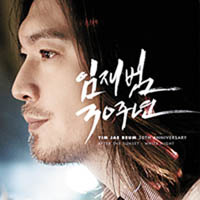 “After The Sunset: White Night”

Veteran singer Yim Jae-beum has released a new album to celebrate the 30th anniversary of his debut. The album has two parts, with part one titled “After the Sunset” and including remakes of other musicians’ songs as well as some of his hits, plus three new songs of his own. Part two, “White Night,” includes eight songs that other K-pop artists whom Yim calls his “junior” sing.

The album is filled with medium-tempo ballad songs that maximize Yim’s signature raspy, powerful voice. The lyrics of many express his love and appreciation toward his family, friends and loved ones, sending a clear message that he’s been able to come this far thanks to their help. The album even includes the famous duet he sang with Park Jung-hyun, “A Wound Deeper Than Love,” but this time he sings it dolefully with Taeyeon from Girls’ Generation.

Yim’s rock spirit can be seen in the remakes of his earlier songs like “Tom Kat” and “Rock in Korea,” bringing back good memories for his longtime fans. He even included his version of John Lennon’s “Imagine,” but perhaps that one was best left on his personal computer.