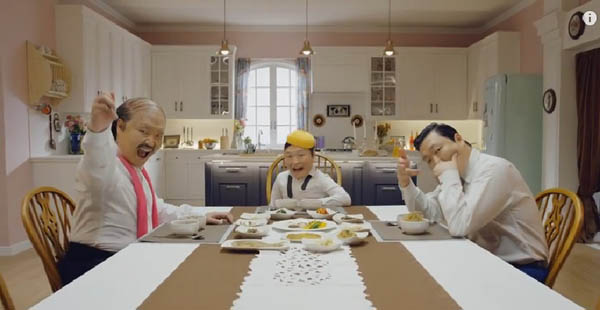 The newest track from his seventh regular album had already earned five million views as of Tuesday.

Three iterations of Psy appear in the video, from young Psy to Psy in his late 30s to Psy with salt-and-pepper hair.

By releasing the album, Psy said he didn’t expect his new song to become the next “Gangnam Style,” but he cares a lot about YouTube views because the number of hits on the world’s largest video sharing site is a measure of a song’s popularity.

Two of Psy’s songs - “Daddy” and “Napal Baji,” meaning bell bottoms - have ranked No. 1 on major online music charts since their release on Tuesday.

Other tracks, such as “I Remember You” and “Dream,” also made it into the top 10 most-streamed songs on local online music portals.

Psy’s new album is also getting positive feedback in China. As of Wednesday morning, the videos for “Daddy” and “Napal Baji” ranked No. 1 and No. 4 on QQ Music, the largest music portal in the country.

Psy told the press on Monday that he tried to go back to the basics and filled his seventh album with the kind of music he likes to do.