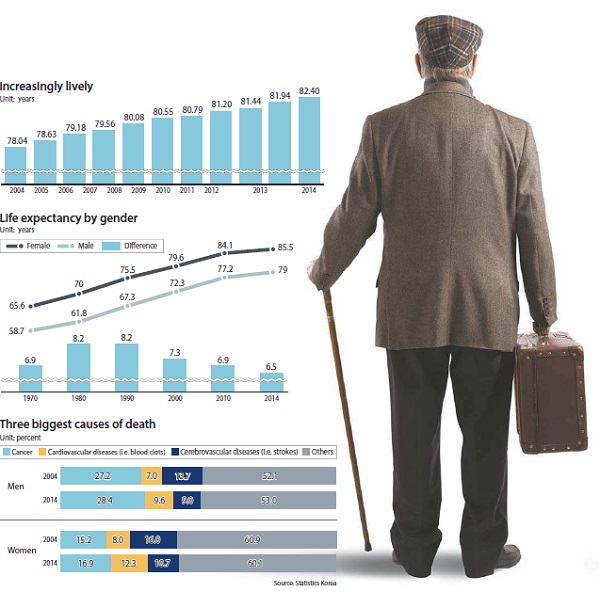 The life expectancy of babies born last year was 82.4 years on average, slightly up from 81.9 years in the previous year, according to the report.

The percentage of boys born last year living until 80 is expected to be 56.8, while girls’ chances are better, at 79 percent.

The life expectancies for men and women born in Korea are 1.2 years and 2.4 years longer than the average for member countries in the Organization for Economic Cooperation and Development (OECD), the statistics agency said.

Among the 34 OECD members, Korea’s life expectancy for men ranked 17th, while that for women came fourth.

The gap between the life expectancies of men and women was 6.5 years, the same as the year before and higher than the OECD’s average, at 5.2 years.

“The overall trend is that men are catching up with women,” the report said. “A reason for that is men’s health is improving, as fewer men are dying of liver-related diseases.”

It also showed that among babies born last year, boys could expect 64.9 years of life free of serious illnesses like cancer. Girls could expect 65.9 years.

However, cancer has become a more possible cause of death. The chances that a boy born last year will die from cancer was 28.4 percent, up from 28.1 percent last year. Girls born last year face a 16.9 percent chance, up from 16.6 percent.

If the risk of dying from cancer is excluded, the life expectancies for male and female babies would increase by 4.8 years and 2.8 years, respectively, the report said.