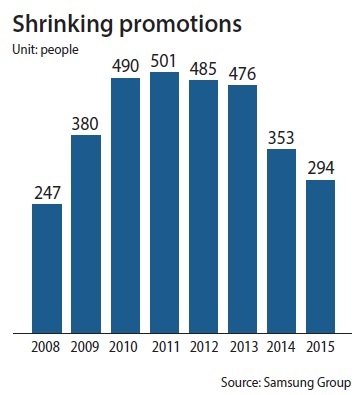 Following a president-level reshuffle earlier this week, the scale was modest compared to previous years. The number of people moving into executive positions stood at 294, the lowest since 2008.

The slimmed down promotions reflect challenges facing Samsung, as key affiliates such as Samsung Electronics, Samsung Engineering and Samsung Heavy Industries all suffered either stagnant revenue growth or massive losses this year. In hard times, the group tends to seek stability over radical changes.

Kim, who currently works at a division in charge of making small-size batteries, is credited with spearheading the development of many industry-first batteries, including a cylindrical battery with a capacity of 1650 mAh back in 1998.

The 57-year-old entered Samsung SDI in 1996 after working at state-run research institutes.

Five of the new executive vice presidents come from the device solutions division that develops semiconductors, reflecting the business segment’s significant gains in profits this year.

Kyung is known for his expertise in NAND flash memory.

By contrast, the once-crown jewel mobile division saw only two people moving up to executive vice president, as the division has recently shown less dramatic earnings than in the past.

Samsung’s mobile division experienced six straight quarters of year-on-year quarterly declines until the second quarter, squeezed by Apple at the top and Xiaomi at the lower end.

Although the division finally returned to a year-on-year gain in the third quarter, the quarter’s operating profit increase of 36 percent from a year earlier falls short of deserving celebration; the base figure in the previous third quarter was one of the worst in recent years.

Amid the narrowing promotions, some managed to be promoted earlier than normal.

Samsung Electronics’ Kim Hak-rae will be promoted to senior vice president from vice president two years earlier than scheduled since he contributed to enhancing the manufacturing process of metal and glass smartphone bodies.

Appointed as senior vice president, Sim Sang-pil is credited with leading the mass production of mobile processor 14-nanometer FinFET, while Kim Hoo-sung is promoted to vice president for his role in developing 14-nanometer NAND flash memory.

The announcement is considered a decision by Jay Y. Lee as he expands his role while his father, Chairman Lee Kun-hee, remains hospitalized.

Earlier this week, the group promoted Koh Dong-jin, executive vice president at Samsung Electronics in charge of mobile research and development, to president of the mobile communications business.