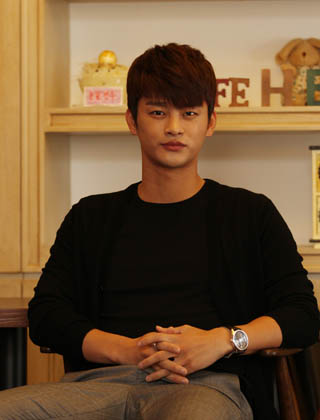 According to the foundation, Seo came to know the story of Jin Yeon-ho, a 15-year-old boy who is suffering from an incurable disease, when the actor took a break after wrapping up his recent drama series “Hello Monster.”

After years of battling the incurable disease, Jin’s left leg was amputated in March and replaced with a bionic leg.

Knowing that Jin was walking the Jeju Olle walking trails with his family, a long-time wish of his, Seo flew to Jeju Island to cheer the teenage boy on.

Make-A-Wish Foundation Korea is fundraising for Jin and other patients.

Meanwhile, Seo will appear in the reality TV show “Mari and I” later this month.

In the reality TV show, celebrities including Seo, Kang Ho-dong, and B.I and Kim Jin-hwan of the K-pop boy group iKon will temporarily take care of the pets of people who go on vacation or business trips.

The first episode of “Mari and I” will be broadcast on Dec. 16 on JTBC.