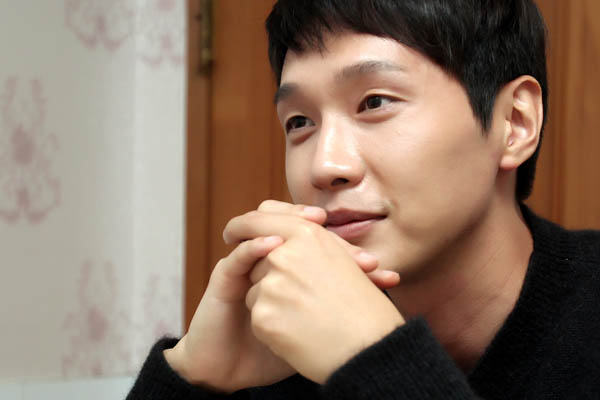 Ji had generally played the wholesome, sweet boyfriend type in his previous works. But viewers certainly saw a different side of him in the webtoon-turned-drama from JTBC about temporary workers who are laid off by a big-box store.

The 31-year-old played Lee Su-in, a manager at the discount store who does not compromise on social injustices.

In fact, when Ji was first cast to play the role, some even questioned if he really was the best choice. Others also raised the possibility that Ji was only cast because he had worked with director Kim Seok-yun in the past, in the 2006 drama series “Old Miss Diary.”

Ilgan Sports, an affiliate of the Korea JoongAng Daily, recently sat down with Ji to talk about his new image.

Although Ji has been in showbiz for some time now, the interview was his first one-on-one encounter with the press, he said, mostly because of his cautious and introverted nature.

Q. How do you feel about finishing “Awl”?

A. It was a really good team. The scripts were ready in advance. Actors had enough time to absorb everything. It was like making a film, in that sense. There is a line in the drama that said, “A manager’s accurate message relieves workers’ stress and boosts a sense of purpose.” It was the same.

What was the most difficult thing about playing Lee Su-in?

He was too real. His inner struggle is very intense. It was difficult to convey that. Because of the depth of the character, I also restrained from making jokes or even laughing on the set with my colleagues as much as I could.

Many had good things to say about your performance, saying that this is “the” role of your acting career.

I agree that it certainly provided a turning point. I always played the wholesome, sweet boyfriend characters. Some even said that they didn’t recognize it was me in “Awl.” It’s also the first time in my career that I got so many calls from directors saying that they were impressed.

Lee Su-in is a person who can’t stand social injustices. What is the thing you can’t stand?

I can’t stand it when people are acting “fake.” You really have to be sincere and put your heart into it when acting. So I get frustrated when I’m acting and my partner character is giggling. There was a time when this happened and I got mad at my partner character.

Any words that you keep in mind when acting?

I once saw actor Park Shin-yang say that an actor should never be lazy about practicing. He said that he starts practicing from 8 in the morning every day, starting with vocal practice. He said that he may be another “speaker,” but he refuses to be a cheap speaker. The words made me take a hard look at myself. I used to be part of a band, and I played guitar eight hours a day. But as an actor, did I practice eight hours a day? The answer was no.

Yes, it was when I was in the musical “Kinky Boots” after I finished military service. The director gave actors a lot of freedom and let them do whatever they want. It was my third gig in theater, and I felt I still needed a lot of training.

At one of the shows, I had nasal congestion and totally screwed up my scenes. But after hitting bottom, I somehow felt unafraid of anything. But I still feel very sorry for the audience who was there that night.

Since “Awl” was so critically acclaimed, do you consider yourself at the peak of your career?

No. I hope my next piece surpasses “Awl” and that the next-next piece outperforms the next.