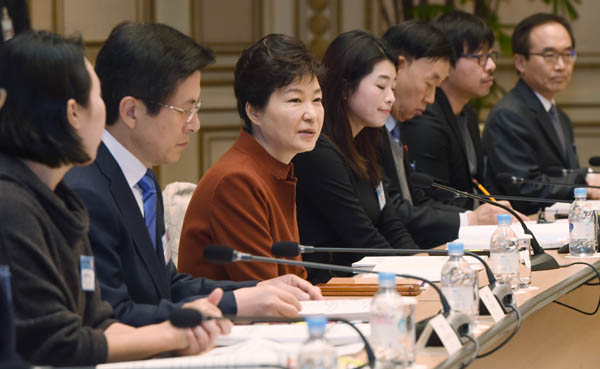 The government revealed Thursday a new plan to allocate more than 197.5 trillion won ($167 billion) over the next five years toward bolstering the country’s low birthrate amid a rapidly aging society.

In a meeting with related agency officials, President Park Geun-hye attributed the phenomenon to the high unemployment rate among young people and the fact that couples are marrying later.

“The trend of late marriages are the result of young people not being able to find proper jobs,” she said before members of a committee formed to address the birth rate issue. “With no income and unstable employment, marriage is unthinkable.”

The proposal calls for providing affordable housing to some 135,000 newlyweds in an effort to entice more couples to tie the knot and is part of the committee’s third basic plan for 2016 to 2020 to address Korea’s low birth rate, which currently stands at 1.2 children per woman.

This is the second time this year that the president has met with the committee, which last gathered in February, and the first time Park has personally taken part in reviewing its basic plan since its inception in 2005.

The president also linked the low fertility rate - the average number of children a woman bears over her lifetime - with the need for the National Assembly to swiftly pass a package of five labor reform bills, which take into account youth unemployment.

“If young people cannot find jobs and their living situations are unstable, they will not be convinced to marry and start a family,” she said. “To enable this to become possible is the fundamental way to resolve low birthrates.

“We need to break free from the antiquated notion that women have to do housework and men have to work. Rather, we need to [put a stop to] long work hours, unnecessary overtime and excessive company dinners.”

Compared to previous proposals, the plan puts heavy emphasis on attempting to address the reasons why couples choose to put off marriage and starting a family ? with one of those reasons being the difficulties in finding affordable housing.

Under the plan, the government will provide approximately 135,000 newlyweds two-bedroom residences through jeonse (a lump-sum deposit) or monthly rent.

This includes allocating for newlyweds some 53,000 apartment units under the “Happy Housing” initiative, a project under the Park administration that builds housing for the needy in central city areas through the development of state-owned land.

Over the next five years, some 60,000 newlyweds will be eligible for private rental housing and New Stay housing, a long-term apartment rental program.

The government will build special complexes in metropolitan areas preferred by newlyweds in their 20s and 30s, including Jeonggwan in Busan and Hanam, which will provide housing to over 5,800 couples.

Couples that have a child will be able to extend their maximum eligibility for the program from six years to 10 years.

Under the plan, the costs of pregnancy-related health care, including ultrasounds and delivery, will also be incrementally decreased until 2018, and is expected to be fully supported by the government within five years. It will additionally provide more incentives for fathers to take paternity leave.

The plan also includes measure to increase support for child care and education and aims to raise Korea’s total fertility rate to 1.5 children per woman by 2020.

In 2005, Korea’s total fertility rate stood at 1.08 and the government consequently allocated some 150 trillion won over the past decade to address the issue through its 1st and 2nd low fertility and aging society plans. Data from the Organization for Economic Cooperation and Development (OECD) indicates that a total fertility rate of 2.1 ensures broad population stability.