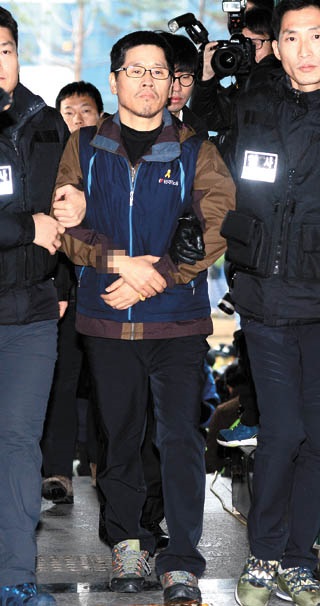 Han Sang-gyun, head of the Korean Confederation of Trade Unions, is transported to Namdaemun Police Precinct in Seoul on Thursday morning after emerging from 24 days of hiding in a Buddhist temple. [NEWSIS]

The leader of Korea’s second-largest umbrella union group turned himself over to police early Thursday, ending 24 days of hiding in a Buddhist temple to avoid being arrested for a rally that turned violent.

The standoff over Han Sang-gyun, head of the Korean Confederation of Trade Unions (KCTU), ended without clashes on Thursday, as the police and Han responded to a last-minute compromise by the head of the Jogye Order.

Han emerged from the temple an hour earlier than the Thursday noon deadline suggested by the religious leader. Escorted by a monk, he walked through so-called “human walls” formed by his supporters to keep police out, and paid his respects to the temple and monks.

He was allowed to spend a short time with supporters, shaking hands and giving hugs. Around 3,000 policemen stood outside the temple waiting for the wanted man.

“Even if I am arrested today, I vow to continue the fight to block labor reform bills that will make conditions at workplaces worse,” Han shouted. He wore a headband with the slogan, “Abolish the temporary worker system.”

“I will keep fighting in jail and in the court,” Han said, raising a clenched fist several times.

His supporters held antigovernment placards and shouted, “We are Han Sang-gyun!” until their leader was taken away by authorities in handcuffs.

The police questioned Han overnight and planned to issue a pretrial detention warrant on him this afternoon for nine allegations including sedition and obstruction of justice.

The detention warrant is issued when the police deem it necessary to extend the detention of a suspect for further questioning for 10 days. An arrest warrant is valid for 48 hours after seizing a suspect.

The union leader took refuge for nearly a month in the Jogye Temple since Nov. 16, two days after an antigovernment rally in Gwanghwamun, central Seoul, that ended with clashes between police and protestors. The rally drew 60,000 protesters to the center of Seoul, some of whom attacked police buses with steel pipes. Police used water cannons against the protestors and one was critically injured.

Although the standoff at the temple ended, the ramifications continued.

The KCTU demanded an apology from the police for storming the Jogye Temple on Wednesday, although they stopped short of seizing Han.

It announced a general strike for Dec. 16 to protest the labor reform bills, which the group claims are bad for blue-collar and temporary workers.

A third antigovernment rally will be held in the heart of Seoul on Dec. 19. A second rally that drew around 14,000 protesters went off peacefully last weekend.

On Tuesday, police issued a 24-hour ultimatum for Han to leave the temple, blaming him for inciting acts of violence.

As the deadline loomed Wednesday afternoon, tensions rose when 1,000 policemen and detectives raided the temple and surrounded a building where Han was taking refuge.

The Venerable Jaseung, president of the Jogye Order of Korean Buddhism, requested an extension of the deadline to Thursday noon, and the police backed off.

The arrest of the KCTU leader was the first such arrest since 2008, when its leader was arrested for organizing a general strike demanding the government renegotiate U.S. beef imports with Washington.

The KCTU, the second-largest umbrella union in Korea, has more than 691,000 members in major industries, including construction and transport.

The Jogye Order - Korea’s most influential Buddhist group with millions of believers - was a key mediator between the police and the union. In Korea, religious venues have served as sanctuaries for political activists avoiding arrest by the state.