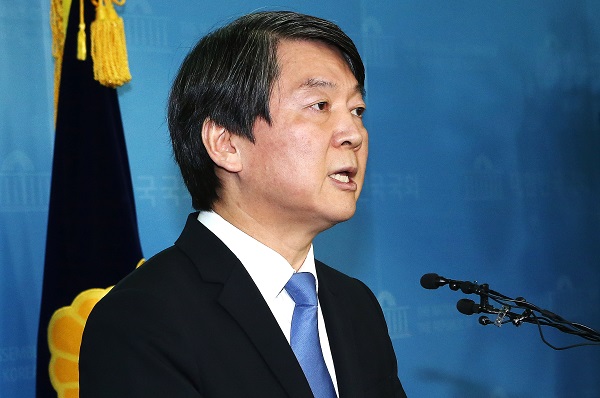 Ahn Cheol-soo, a lawmaker and a former co-chairman of the main opposition New Politics Alliance for Democracy, holds a press conference at the National Assembly on Sunday to announce his defection from the NPAD. By Kim Seong-ryong

Ahn Cheol-soo, a lawmaker and the former co-chairman of the New Politics Alliance for Democracy (NPAD), declared his defection from the party on Sunday, nearly triggering a split in the country’s main opposition party.

“I am leaving the New Politics Alliance for Democracy today,” Ahn said in a press Sunday morning. “I vow to create a political group that can win the next presidential election. In order to do make this happen, I will do everything I can.”

Ahn’s announcement comes after negotiations with current NPAD Chairman Moon Jae-in over electing a new leader failed. Korea’s main opposition party has been grappling with plummeting popularity for months in the lead-up to general elections in April.

The software mogul-turned-politician co-founded the NPAD in March 2014 along with Democratic Party leader Kim Han-gill.

“If this change cannot be done within the party, it should be brought by a strong shock from outside,” he said.