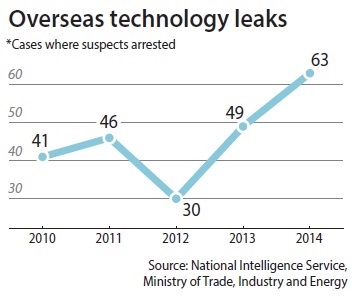 The government has rolled out a three-year plan to protect Korean companies from an increasing number of technology leaks overseas.

The Ministry of Trade, Industry and Energy and the Small and Medium Business Administration have jointly prepared technology protection guidelines for local small and midsize tech companies that often have joint research projects or mergers and acquisitions with foreign companies.

“We’re also trying to include the overseas technology leak prevention measures into the government’s export competitiveness promotion policies to reduce the occurrence of leaks in Korea’s flagship industries,” said Toh Kyung-hwan, the assistant minister of industrial creativity and innovation at the Trade Ministry.

The Trade Ministry has spent the past three years selecting the nation’s top 47 key technologies to be protected against cross-border leakages. It has subsidized training programs that foster talents specializing in industrial security and legal experts to tackle the problem.

On Monday, the ministry held a policy conference to introduce the new plan and invited small firms in the automobile, shipbuilding and semiconductor businesses.

The three-year plan is centered on small and midsize firms, in line with the ministry's discovery that nearly 64 percent of technology leaks happen at SMEs, while 20 percent happen at state-run research institutions and 16 percent at major conglomerates.

Last year, the financial damage caused by the leaks amounted to 2.49 billion won ($2.1 million), an increase from 1.02 billion won in 2009, according to the Trade Ministry.

While 111 industrial technology leak cases were caught by the police last year within the country, 63 incidents were reported and caught abroad. The number of cross-border leaks almost doubled in the last two years, compared to 30 in 2012, according to the National Intelligence Service.

Nearly 80 percent of all technology leaks over the past five years were committed by current and former employees of each company, as well as those working at suppliers.

They were lured by foreign competitors offering substantial financial compensation in exchange for key technology information.

Over the past decade, most technology leaks took place in electronics and IT companies, though recently more sectors have been victimized.

Under the plan, the Trade Ministry will grant 40 million won to each SME to invest in information security. It wil also give financial incentives to local universities that hire recently retired technology experts to prevent them from being hired by overseas competitors.