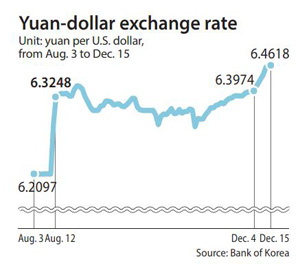 The Chinese central bank again depreciated its currency on Tuesday for the eighth consecutive day, bringing its value to a four-year low for the second straight day. The moves by China are raising worries about the impact on the Korean economy and its financial market, especially with the first interest hike in the United States in nine years expected later this week.

The People’s Bank of China (PBOC) has steadily lowered its currency’s value against the U.S. dollar for the past several months, but in incremental amounts. A week ago, the PBOC started slightly larger depreciations.

The value of the yuan against the U.S. dollar slid by 0.04 percent to 6.4618 yuan per dollar on Tuesday, according to data from the China Foreign Exchange Trade System, compared with 6.4495 yuan per dollar on Monday. This was the largest devaluation since the PBOC devalued the currency 3.3 percent over three days starting Aug. 11.

Local analysts warned that China may be launching a global currency war against the U.S. dollar, which has been strengthening over the past few months, citing a statement posted on the PBOC’s website last Friday.

The PBOC wrote that it will push a policy in which the yuan’s exchange rate is linked to a basket of other currencies instead of the U.S. dollar alone. This means that China wants to shield itself from the impact of a possible U.S. Fed rate hike and strengthening of the dollar. A depreciated yuan will also boost exports and growth, local analysts said.

Analysts say that the Chinese currency will maintain a weakening trend in the future, but at a slow pace.

Most global investment banks expect the yuan to fall as low as 7 yuan per dollar, and Cui Xuehua, an analyst at Korea Investment & Securities, said much of the devaluation will happen next year.

Although analysts say the devaluation will happen slowly, some worry about the effect on Korean exporters and the Korean financial market.

“A weakening yuan is not good for Korea, especially when it already faces the burden of the Fed’s rate hike,” which is expected as early as this week, said Huh Jae-hwan, a senior researcher at KDB Daewoo Securities, by phone. “Korea is facing a double burden. Korea may see its export competitiveness weakened further, and may be exposed to a threat of deflation in the long term.”

When it comes to Korea’s main export products, mostly heavy industry and electronics products, Korea is likely to face more price competition from Chinese products because the two countries have similar portfolios in those areas, said Kim Chang-bae, a researcher from the Korea Economic Research Institute.

The depreciated yuan may also bring down the won’s value, which would make the Korean financial market less attractive to foreign investors, who are already getting ready to pull out from Korea due to the U.S. rate hike.

“The joint depreciation of the yuan and won and the upcoming U.S. rate hike will cause an exodus of foreign money, in particular from the Western world,” Huh of KDB Daewoo Securities said. “However, the size of the foreign inflow into the Korean financial market hasn’t been as large as other emerging markets after the 2008 global financial crisis. This means that the impact of the exodus will be limited.”