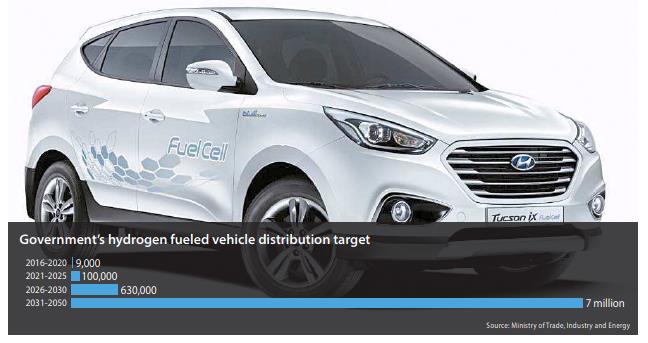 Hydrogen-fueled vehicles will drop in price over the next few years thanks to an expanded government subsidy to boost sales of the environmentally friendly cars.

Today, a hydrogen-fueled car can cost in excess of 50 million won ($42,000), putting it in the same price range as a high-end luxury car. However, the government on Tuesday decided to expand the subsidy for the non-gasoline vehicles, allowing a price tag as low as 30 million won starting in 2018.

The government plan is to bring down the price of hydrogen-fueled cars in the next two years to 30 million won and above, and in 2020, the price will be lowered further to less than 30 million won. The specific amount of subsidies has not been decided, but it is expected to be similar to subsidies offered on electric vehicles.

This year, 71 hydrogen-fueled vehicles have been sold, which accounts for only 0.01 percent of the total sales. The government plans to increase the number of hydrogen vehicles on the streets of Seoul to 9,000 by 2020 and up to 630,000 by 2030. It hopes hydrogen cars to account for 10 percent of new vehicles sold every year.

The hydrogen vehicle market is also expected to create 94,000 new jobs while contributing to the fight against global climate change. Once there are 630,000 hydrogen-fueled vehicles on streets, the government expects a reduction of 4.4 million tons in greenhouse gas emission, while air pollutants are expected to drop by 5,500 tons. Additionally, 630 million liters (160 million gallons) of crude consumption is anticipated.

A hydrogen car is powered by a device called a fuel cell, which converts hydrogen to electricity, giving off only heat and water as by-products.