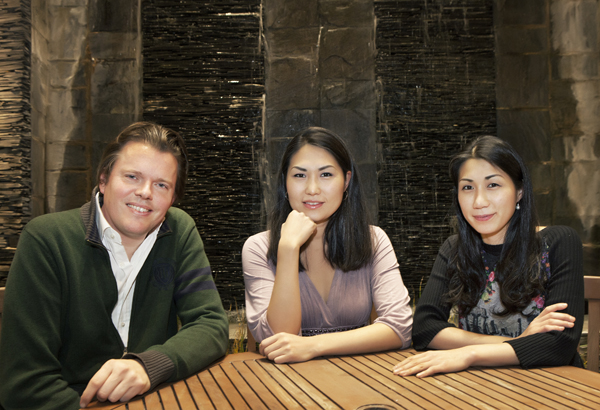 It’s unusual in Korea for a trio or quartet of family members to perform together. The only known example is the Chung Trio, but they hardly perform together these days.

The Copenhagen-based trio says there are certain advantages to being a family group, which is perhaps one of the reasons they have been able to win so many prestigious awards.

“Of course, my sister and I, we’ve been playing together since we were about 5 years old,” Soo-jin said. “Jens had been playing a piano and cello duo with Soo-kyung for a couple of years before we formed a trio in 1999, putting the three together, so it was a good combination from the start.”

For them, the best part of being a family trio is how easy it is to find time to practice.

“We can be very flexible,” Soo-jin said. “It’s very nice to be a family trio. We can even rehearse at midnight in our living room.”

It’s often said that being in an ensemble is almost like being in a marriage because it requires commitment, sacrifice and a desire to achieve something together.

“You really have to be committed to the trio or the quartet, and if you are already a family, it makes things a lot easier,” Soo-kyung explained.

Because of their family bond, Trio con Brio Copenhagen has received praise from critics for their “unique way of communication and homogeneity,” she continued, and has won prestigious awards including from the Danish Radio Competition, the Italian Premio Vittorio Gui and the Trondheim International Chamber Music Competition, and the Allianz-Preis prize for Best Ensemble at the Festspiele Mecklenburg-Vorpommern in Germany.

“Because my sister and I have been playing so much together since childhood, many people say they can’t hear the difference between the cello and the violin when we give the melody to each other,” Soo-kyung said. “They say they don’t know where one starts and the other stops.”

“I also think because we are so closely connected, our interpretation is ‘one thought’,” Elvekjaer said.

While many classical musicians who are active in Europe find it difficult to break through in the United States and end up having to start over, according to the trio, their winning of the Kalichstein-Laredo-Robinson International Trio Award in 2005 acted as the door to the American classical music scene, allowing them the opportunity to hold dozens of concerts in the United States at top venues, starting with Carnegie Hall in New York and going on to Washington, D.C., Chicago and more.

To celebrate the 150th anniversary of Danish composer Carl Nielsen’s birth, the trio visited Korea for the first time in three years. They held a concert at the Seoul National University on Tuesday evening, which was organized by the Embassy of Denmark in Korea. Prior to the concert, the Korea JoongAng Daily sat down with the trio for an interview. Here are some edited excerpts.

Q. Carl Nielsen must be quite an influential composer for Danish musicians. How did the musician influence you musically?

A. Soo-kyung: I find his music very original. Also, what’s interesting is that as we are based in Denmark and are involved in the music scene, I know colleagues from my previous orchestra, which is the Royal Orchestra where Nielsen used to work as a concert master, who know people who worked with Nielsen. Moreover, some of his symphonies premiered at the Royal Theater, where I used to work, and Jens is teaching at the Royal Danish Academy, where Nielsen used to study. So we are always connected to the musician and we feel privileged that we work with people who knew what his music sounded like. We feel like we very much have a direct line to his music.

Elvekjaer: He plays an important part in the musical history of Denmark because he was very broad as a composer. He didn’t only write large symphonies that are very original in the language, but what is interesting is that Nielsen also composed a lot of songs. These songs are really a part of the national song book. We have a daughter who is soon going to be 3 years old. Soo-jin also has a daughter who is soon 2 years old, and we actually sing several songs by Nielsen to them. So he’s a very integral part of Danish culture. It’s quite funny to think about that, and we don’t think about it every day, but his music is there from childhood for most Danish people. His heritage is actually everywhere.

Trio con Brio Copenhagen was able to hold a concert in Korea thanks in part to the musical patronage program of Jabra, a wireless headsets company. How important are such art patronage projects to artists?

Elvekjaer: That’s right. The reason that Beethoven, Mozart and all these great musicians were able to survive was because of the support from patrons.

Soo-kyung: They were almost always supported by one royal family each. They were sponsored for their whole life. I also remember when I was young, in Germany, we were also invited by one company that sponsored a program for fostering young talents, consisting of about 50 soloists and ensembles. I mean, the companies can support musicians who have already made a name but helping the younger generation is not so easy because you don’t know what comes out. It’s an investment but a priceless investment.