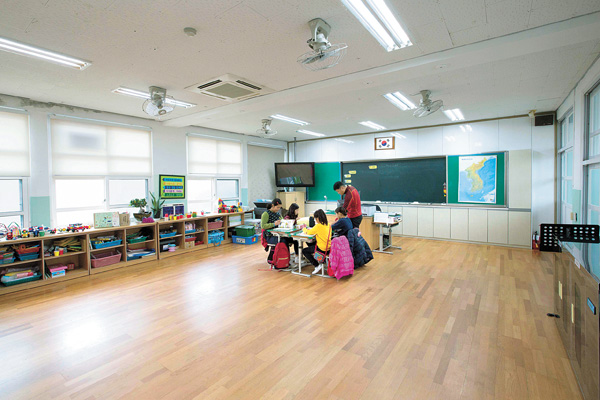 There were only four students in the fourth-grade classroom at Donggang Elementary School in Goheung County, South Jeolla, down from 35 just nine years ago. Goheung County saw a 33 percent drop in its population between 1998 and 2014, the result of a low fertility rate and seniors making up 36 percent of the population. [OH JONG-CHAN]

At the only birth facility in Goheung County, South Jeolla, four beds stand empty, pushed over against one wall. And in another room, just one newborn baby lies in a solitary basket, labeled with her name and date of birth: Nov. 20, 2015.

According to Han Seong-tae, an obstetrics and gynecology specialist, there have been no deliveries at the center in the past two weeks.

“On average, we have two to three deliveries a month,” Han said. “But just 10 years ago, our clinic alone had 200 births a year.”

The numbers illustrate the crisis rural areas like Goheung County currently face amid a low national birthrate - a problem exacerbated by the migration of the younger population to Korea’s urban centers.

The JoongAng Ilbo recently analyzed population trends between 1998 and 2014 across 226 cities, counties and districts and found Goheung to have had the greatest decrease during that time with a 33 percent decline.

In that same period, it also saw a decrease in women aged 20 to 39 - in their key childbearing years - to rank sixth-lowest. The number of births, meanwhile, fell to ninth-lowest in the country.

Over the past 15 years, Korea has experienced a low fertility rate - the number of children a woman has over her lifetime - which currently stands at 1.2.

Han Song-hwa, 35, who is due to give birth in February, recently moved from Seoul back to Goheung, her hometown, and visited the clinic earlier this month.

“Most of the young people left for the cities in order to find jobs or a spouse. My remaining friends married, but more than half of them don’t have children and almost none have more than two kids.”

The situation in Goheung even got so bad at one point that the clinic shut down in 2007, but reopened in 2013 with support from the Ministry of Health and Welfare.

The low birthrate has also had a significant impact on local schools.

There is only one elementary school in the county, in Donggang-myeon, which barely has enough students to fill its 68 square meters (732 square feet).

There were only four students in the school’s fourth-grade homeroom when reporters from the JoongAng Ilbo paid a visit last month. The classroom had so much empty space left over that a ball game could have been played in the middle of it.

Just a decade ago, the elementary school had 215 students, but that has now dropped to 76.

In fact, there used to be four elementary schools in Donggang-myeon, but they were combined after the other three shuttered.

Now, students who live far away must take the bus every morning, a trip that can take as long as 50 minutes.

“About 80 percent of the newborn babies at one point were born into multicultural households, but that figure has recently dropped down to 65 percent,” said Park So-eon, who heads the Goheung Health Center.

By contrast, the county has one of the highest percentages of seniors over the age of 65, which account for 36 percent of its population compared to the national average of 13 percent. And the county’s hospitals, clinics and health centers see no shortage of elderly patients.

“Some 70 to 80 percent of in-patients are elderly,” said the general affairs manager of one county hospital. “It’s rare to see young people.”

Shuttered buildings here are often transformed into facilities for seniors, which has included two schools.

“Next year, we will be shutting down one school, and more are scheduled to close their doors in the future,” said Nam Seong-jo, an official with Goheung’s Office of Education.

Since 1992, 26 schools in the county have shut down, and some have even been turned into farming warehouses.

Nearly half of Duwon-myeon’s population, or 49.4 percent, are senior citizens. When the newspaper visited at 4 p.m., most pharmacies and restaurants were already closed for the day.

A 57-year-old cab driver from the neighborhood, Mr. Lee, said that it had been several years since he had last heard a baby cry in Duwon-myeon.

“The youngest person I know is 40 years old,” he said.

Local dry cleaning businesses and restaurants have also decreased by 10 percent in the past five years.

Goheung County has responded by implementing more incentives for families to have children and is working toward increasing monetary grants for having children.

Currently, there is no grant given for the first child, though the county plans to give 2.4 million won ($2,031) to first-time parents starting next year.

For the second child, it will provide 4.8 million won, double the current figure of 2.4 million.

It will also increase the number of free ultrasounds for pregnant women from four to eight starting next year. Other incentives include discounts of up to 50 percent for families with three or more children at the county’s recreational facilities and science museum.