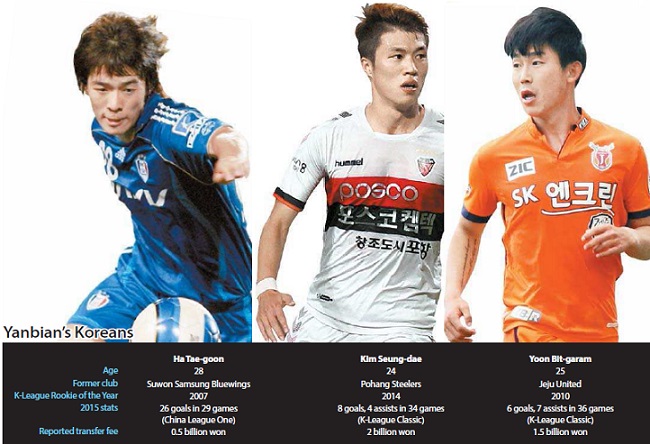 A group of high-profile Korean football players are having a major influence on their team’s dramatic success - in China.

Yanbian Changbaishan FC has three former K-League Rookie of the Year winners and a Korean coaching staff who now have their sights set firmly on a “miracle” first-division championship.

With the Korean contingent, and a bigger budget from an improved TV broadcasting deal, the team is hoping to repeat their second-division success, which earned them promotion to China’s first-division Super League.

This season, the 47-year-old brought former Suwon Samsung Bluewings forward Ha Tae-goon, and it turned out to be a jackpot move.

This year, Yanbian topped the second division with 17 wins, 10 draws and three losses, which was a big improvement from last year’s three wins, nine draws and 18 losses. Ha, 28, was the top scorer with 25 goals.

Park was considering returning to his homeland after the club was promoted. But after watching the passion and effort of his players, he renewed his contract with Yanbian for two more years.

Now familiar with the power of Koreans, Yanbian is trying aggressively to enlist more Koreans for the team.

Ha was named top rookie in 2007, while 25-year-old Yoon won the award in 2010. Kim last year was named K-League Young Player of the Year, which is equivalent to Rookie of the Year.

“I heard that Yanbian is giving big money to sign players and their salary,” a spokesman from Pohang said. “Although Kim is a core member for us, it is difficult for us to hold a player just by appealing to his loyalty and faithfulness to the club.”

Founded in 1955, Yanbian is already a team with a Korean background as it is based in Yanji, which is under the Yanbian Korean Autonomous Prefecture in Jilin Province, with a large population of Koreans.

From 1994 to 1996, the team was sponsored by Korea’s top conglomerates, such as Samsung and Hyundai. Before Park, the team already had some success with Koreans. In 1997, the team reached fourth place after it hired the late Choi Eun-taek.

Yanbian is run by the local government, and its annul budget has been around 12 billion won ($10 million), which is small compared to other teams. But Chinese President Xi Jinping’s love of football has helped their finances.

According to Chinese media, Xi visited Yanbian in July and told government officials to enhance financial support for the club.

After Xi’s visit, the team’s main sponsor, life insurance firm Fude Holdings, reportedly raised its sponsorship from 8 billion won to 35 billion won, while other local companies contributed to the sponsorship.

The team is also expected to see a big increase in television broadcasting deals.

The Super League signed an 8 billion yuan ($1.3 billion) deal in October that will allow the China Sports Media Group to broadcast games of the top-tier football league over the next five years. The value of the deal is more than 30 times higher than this year’s deal.

“Yanbian’s budget will be around 50 billion next season,” an official who is close to the team said under the condition of anonymity.

“About 5 billion won is allocated to sign foreign players, and this would be used to sign Korean players.”

For coach Park, getting a big financial boost to draw Korean players makes the club’s next season brighter. He is still aware that Yanbian is an underdog in the first division.

“Although the team’s budget has quadrupled, we are still small compared to other teams,” Park said.

“Yanbian won the second division with strong cohesion and team play from the players.

“With Korean players, I will upgrade the team play and will aim to achieve another miracle.”