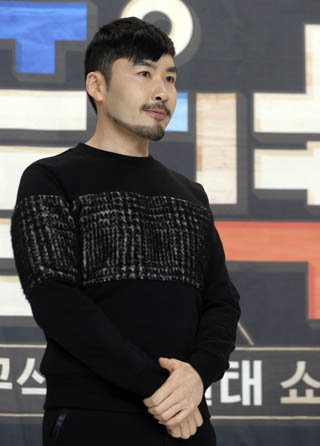 TV celebrity Noh Hong-chul showed up at an event held in Yeongdeungpo District, western Seoul, on Thursday to promote his new show, “My Room’s Dignity.”

It was Noh’s first public appearance since he left his various TV shows after he was caught driving under the influence of alcohol in November 2014.

“My Room’s Dignity” will hit the air on Wednesday on tvN and will provide tips on how to renovate old and worn-out furniture and decorate on a tight budget.

When asked what made him choose this show for his comeback, he said, “I wanted to do a show that I can enjoy. When I’m in love with it, I think the viewers will find the show entertaining, too.”

Noh said on multiple shows that he loves to decorate his place.

The 36-year-old celebrity was also asked about the possibility of returning to “Infinite Challenge.” He was one of the regular hosts of the popular show until the scandal.

“The show has become a favorite of many Koreans. It has been a meaningful show because I was able to come this far thanks to it,” he said.

“I still keep in touch with the production team and guests, but we all agree that [my return to the show] is not something we can decide.”

The show receives requests from viewers online, and Noh then goes out to interview people. The program will first be aired online, and then an edited version will be shown on TV.