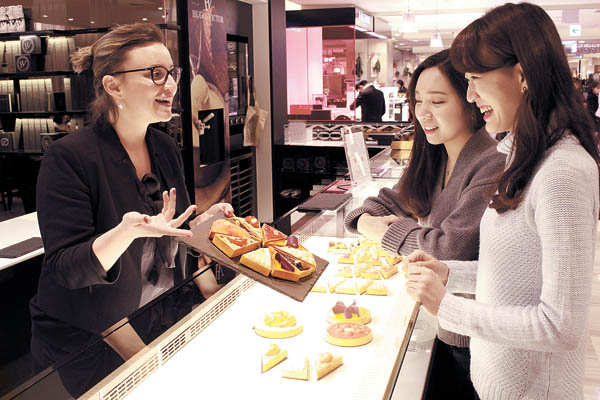 People browse at the French dessert shop Hugo & Victor at Lotte Department Store in Myeong-dong, central Seoul, on Wednesday when the department store pre-opened the shop ahead of the official opening today. [LOTTE DEPARTMENT STORE]

Local department stores hope they have come up with a sweet solution to their stagnant sales growth.

Major department stores have revamped their dessert sections to capitalize on Korea’s craze for everything sweet, introducing new trendy and luxury tart and pastry shops from across the world.

Lotte Department Store said on Thursday that it will expand the area devoted to desserts at its Myeong-dong branch in central Seoul to add 17 new brands.

One of the most anticipated, Hugo & Victor, the French dessert maker, is to officially open its first store in Korea in the expanded area today.

Other French shops due to open by January next year include macaron maker Pierre Herme and Parisian luxury chocolatier La Maison du Chocolat.

Also on the sugar radar is Japanese cheese tart maker BAKE, which will be opening its debut store under Lotte Department Store’s roof. The shop’s signature cheese tart is enmeshed with a soft cheese mousse, made from Hokkaido cream cheese and covered with a crispy pastry.

After those cheese tarts became a big hit in Japan, BAKE opened its first overseas store in Hong Kong, where there is often a two-hour waiting time.

Lotte Department Store said that the bakery shop will come with production facilities used in Japan.

“To create authentic tastes, we will bring the production equipment into the shops at the department store,” said Nam Ki-dae, head of the food business division at Lotte Department Store.

The origins of the new dessert restaurants are not confined to overseas countries.

Among the local companies is Ops Bakery, which originated in Busan.

With seven shops in Busan, Ops is one of the most popular and well-known bakeries in the city. The branch in Lotte Department Store will be the first in Seoul.

The new dessert shops will bring the number of dessert brands at the shopping venue to a total of 38 and extend the site area to 2,350 square meters (25,300 square feet).

The move is a departure from the past strategies where dessert sections were considered a supplementary part of department stores.

But as sales at dessert shops pulled off double-digit sales growth in the past three years, department store chains have started investing more in the sweets segment.

The success is outstanding at a time when three major department stores - Lotte, Hyundai and Shinsegae - remain stuck in single-digit sales growth.

The dessert stores at both Lotte and Hyundai have posted over 20 percent annual sales growth since 2013.

Rival Hyundai Department Store also banks on exotic food and luxury sweet treats. Its effort is evident at its new branch in Pangyo, Gyeonggi. It showcased a wide range of popular bakery and dessert shops, and dessert lovers have been known to make a sweet-toothed pilgrimage to the store from nearby cities.

Other brands making their Korea debuts at the Pangyo store include Danish juice chain Joe & The Juice and Sarabeth’s Kitchen, a New York-based restaurant.

Backed by the success at the newest department store, Hyundai decided to feature Magnolia Bakery at its COEX branch in southern Seoul.

To celebrate the new opening on Tuesday, Vice Chairman Jung Gyo-seon of Hyundai Department Store attended the ceremony along with U.S. Ambassador to Korea Mark Lippert.

Shinsegae has also upgraded its dessert segments as dessert sales surpassed those of other foods by 5.1 percent in 2013 for the first time at Shinsegae in Banpo-dong, southern Seoul.

Among them are Veniero’s, a New York-based Italian bakery and cheesecake company; Hotel Douce, which offers traditional French sweets; and La Montee, which uses French ingredients and natural yeast.