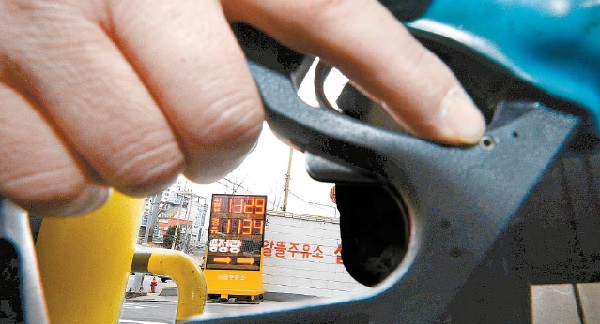 A gas station in Yeongdeungpo District, western Seoul, displays the gasoline price for Dec. 13 at 1,329 won (1.12 dollars) per liter, while diesel cost 1,134 won per liter. Due to record-low international oil prices, the lowest since 2004, the domestic oil market has seen prices decline for five consecutive months. [NEWSIS]

After the U.S. Federal Reserve this week raised its benchmark interest rate for the first time in nearly a decade, it seemed as though the biggest risk factor limiting Seoul’s main bourse from advancing this year had been removed.

But just a day later, the Kospi quickly turned as the stock markets opened at 9 a.m. to lose more than 16 points - or 0.8 percent.

Yet, even though the intensity of the fall softened later in the day, the three-day rally the primary market had previously enjoyed came to an abrupt end, leading it to close at 1,975.32, or 2.64 points (0.13 percent) lower than on Thursday.

So if it wasn’t the uncertainties surrounding the U.S. central bank, exactly what did cause the decline?

Cheaper crude prices, for one, which many insiders expect will have a significant impact on the global market next year.

“Recently, the markets in Europe, the United States and even in Asia have all reacted sensitively to international crude price changes,” said Lee Hyun-ju, an analyst at NH Investment & Securities.

But more important to Korea and for emerging markets are oil prices, according to Park Sung-hyun, a Samsung Securities analyst.

“The decline in commodities prices centered on crude will shake the foundation of emerging markets, which are highly dependent on resources, and it could threaten Korea’s economy as well as the financial markets that have significant trade relations with those economies,” he said.

The impact of low crude prices have raised concerns.

According to the Bank of Korea on Friday, producer prices for November fell for five consecutive months to the lowest point in more than five years.

Normally low crude prices are welcomed since they ease the burdens on manufacturers by reducing production costs, which can lead to increased investment and production.

Additionally, it encourages consumers to spend more as consumer prices decline. But recent trends have been more negative.

The Korean central bank currently faces an already low inflation rate, and an additional drop in producer prices could add to already low consumer prices, which has the potential to push the Korean economy into a state of deflation.

On Wednesday, the Bank of Korea set its goal for next year in battling deflation as it reduced its consumer price index target for 2016-18 to 2 percent - the first time since 1999 that the Bank of Korea has set a specific figure for its target inflation.

Although the bank didn’t elaborate on its reasons, the move was a clear message that it plans to raise headline inflation at that level. Though many doubt it will be an easy task.

“Without a dramatic shift in inflationary momentum, discussions on inflation misses are likely to become a regular feature in government communications,” Mark Walton, an economist at BNP Paribas, said in a report released earlier this week. “Given inherent lags in pass-through to local prices, recently renewed downward pressure on global commodity prices will push down on headline inflation in the coming months.”

A major concern is that the situation could only deteriorate next year, and global investment banks are already lowering their forecasts on crude prices for 2016.

Moody’s on Tuesday cut its outlook on Brent crude from $53 per barrel to $43, while WTI pushed down its predictions from $48 to $40 per barrel, citing excessive supplies of oil production.