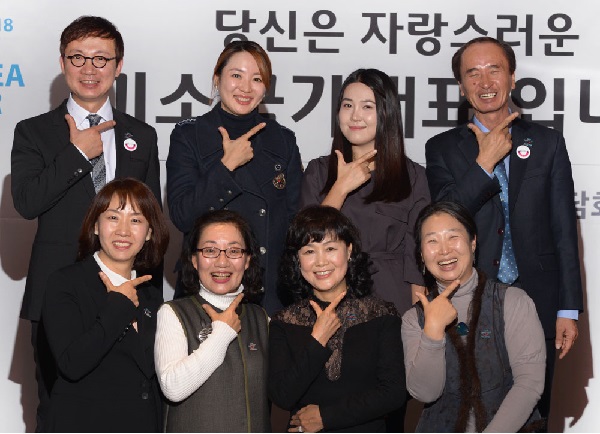 Members selected for the K-Smile Campaign ahead of the 2016-18 Visit Korea Years initiative pose for a photo. [VISIT KOREA COMMITTEE]

Hong Young-shin’s main job working for the Korea Railroad Corporation is to manage Wonju Station in Gangwon, but around here, she also is known as “Ms. Smile of Korea.”

“Well, people say I’m the stationmaster with the most beautiful smile in the country,” she said. “I believe a smile makes people open up more easily.”

Including Hong, eight people in the tourism industry were recognized this year for the K-Smile Campaign, which comes ahead of the 2016-18 Visit Korea Years initiative in the lead-up to the 2018 Pyeongchang Winter Olympics.

Kumho Asiana Group Chairman Park Sam-koo, who heads the Visit Korea Committee, was in charge of making the final selection. Candidates were recommended by local district offices and other tourism-related state-run agencies. Those chosen will represent the image of Korea to foreign tourists.

Established in 2010, this is the committee’s 10th time running the program, and so far, about 190 people have served as smile ambassadors.

Last month, former honorees gathered in downtown Seoul with the K-Smile finalists to offer advice on how to handle foreign tourists. They defined a smile as “a comfort,” “friendly” and “heart-warming” gesture and a “consideration for strangers.”

Jeong Gil-seon, who sells decorative plates in Namdaemun Market was an honoree in 2010. “To be honest, I was a bit afraid to deal with strange foreigners,” he recalled. “But I can remember their expressions relaxing when I approached them and said hello.”

Moon Jeong-hyun, who runs a hanok (traditional Korean house) tour site in Andong, added, “Regardless of whether you speak English well or not, everything will be fine if you just wear a smile and use body language.

“I strongly believe that a warm smile will make tourists want to visit Korea again.”

The smile ambassadors agreed that they felt a sense of pride for their work.

“I believe we are the faces of Korea,” Seo Kyung-hee, 59, said. “It’s tough work physically, but I always try to have a smile on my face.”

Likewise, taxi driver Lim Gwang-mook, 59, said he believes the world could smile as Korea smiles. “Every time I see foreign tourists, I smile and ask them to come again later because I think it truly has the power to bring them back.”