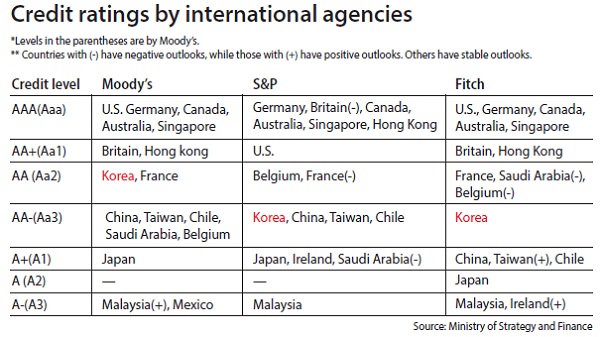 Despite pretty dire outlooks for the economy next year, Korea received its highest-ever sovereign credit rating by an international agency, thanks to its fiscal resilience and reform efforts.

Moody’s, one of three major international credit rating agencies, announced on Saturday that it upgraded Korea’s rating from Aa3 to Aa2, the third highest out of 21 rating levels by the organization.

Moody’s also changed its outlook from positive to stable.

The upgrade was made in eight months since April 10, when the agency changed its outlook for the country from “Aa3 stable” to “Aa3 positive.”

“The key drivers of the upgrade are Moody’s expectations that Korea’s credit metrics will remain strong and resilient compared to rating peers and that Korea’s very high institutional strength will support continued implementation of structural reforms, further promoting economic and fiscal resilience,” the agency said in a statement.

Among the G-20 nations, Korea has the sixth-highest credit rating after the United States, Germany, Canada, Australia and United Kingdom. France holds the same Aa2 level.

Korea has the highest level among Asian nations. Moody’s has given China Aa3 and Japan A1.

External vulnerabilities continue to diminish, the agency noted, saying the country’s income from international investments has grown since 2014 to reach $191.7 billion as of September, adding to its international assets. That is the equivalent of about 14 percent of nominal GDP.

“Relatively low levels of nonresident holdings of government debt, at less than 15 percent of the total, limit the direct exposure of the government’s funding profile to global financial market volatility,” the agency said.

Choi Kyung-hwan, deputy prime minister for the economy and finance minister, said on Sunday that the upgrade by Moody’s is “very meaningful” at a time when high market volatility is expected.

“The Moody’s decision will serve as a bulwark for the Korean economy, which is expected to undergo low growth next year and face high market volatility as the U.S. has begun to raise its interest rates,” Choi said at a press briefing held at the Seoul government complex in Gwanghwamun. “A higher credit rating may help prevent rapid capital outflow and continue economic recovery momentum.”

The minister said the latest upgrade can be interpreted as a positive assessment of the Park Geun-hye government’s economic policies and achievements over the past three years.

Korea is the only country that received an upgrade from Moody’s this year, Choi said. In the past three or four months, credit ratings for Japan, France, Saudi Arabia and Brazil have all been lowered.

“The international agency said the Korean government is maintaining fiscal soundness while pushing for structural reforms,” Choi said. “For long-term growth, the government will continue its efforts to reform four areas [the labor market, public sector, finances and education].”

The minister strongly called for early passing of pending bills.

“Since Moody’s cited the government’s acceleration in reforms as a major reason for its upgrade, delays in the reform plan might lead to a downgrade of the sovereign credit rating in the future,” he said.

“A backtracking in ongoing structural reforms and deterioration of Korea’s long-term growth prospects could lead to a negative rating action,” the agency said.