Latest products from China are better than ever

Latest products from China are better than ever 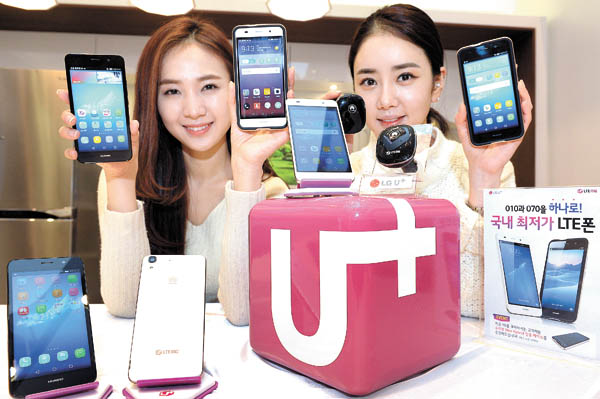 Huawei’s Y6 smartphone is offered at 154,000 won (130 dollars), making it the cheapest smartphone on the local market. [NEWSIS]

Chung Chang-mook recently bought a Tunland pickup truck, made by Chinese automaker Foton. At 33 million won ($27,951), the Tunland is more expensive than local competitor Ssangyong’s Korando, which runs between 21 million won and 28 million won. But Chung liked the fact that Tunland can hold up to 9,000 kilograms (19,841 pounds), which is more than double the capacity of the Korando.

Tunland entered the local market in October and has already received over 200 preorders, according to an auto industry insider. “We set the sales target at 3,000 in 2016,” said a spokesman for Daewoong Auto, which manages Tunland’s sales in Korea.

The pickup is just one example of the way in which companies from China, which are making higher-quality consumer goods than ever before, are poised to succeed in Korea.

Perhaps the most widely recognized case is electronics maker Xiaomi. Once dubbed the “mistake of China” for its ambition to change the negative perception of Chinese goods by offering top-tier products at rock-bottom prices, Xiaomi now has Korean retailers clambering to become official distributors of its popular smartphones when it sends representatives to Seoul next month. Currently, Xiaomi products are imported to Korea independently by small and medium-sized trading companies. 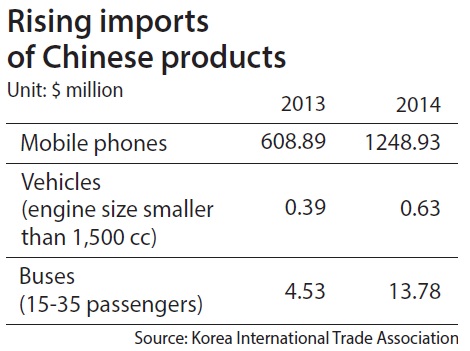 “Whoever wins an official deal with Xiaomi will be able to make a huge profit,” a retail industry insider said. “We are just waiting for them to contact and choose us.”

“Chinese manufacturers are spending more money on research and development and getting rid of pre-existing notions about the low quality of goods from the mainland,” said Cho Cheol, a director at the Korea Institute for Industrial Economics and Trade’s auto department. “A growing number of local consumers now thinks Chinese products are worth what they have paid for them.”

Xiaomi is adding TVs to that list, with a local importing company recently receiving certification from the National Radio Research Agency to sell Xiaomi’s 40-inch model.

Xiaomi’s TV is currently 50 percent cheaper than similar models by local manufacturers including Samsung and LG - and that’s worrying to some.

“It’s significant because Xiaomi has expanded its market from accessory items to actual home appliances,” an employee of a local TV manufacturing company said. “We are discussing how to compete with its mid to low-priced products.”

Other Chinese companies are making similarly expansionary moves. Most recently, Huawei began distributing its Y6 smartphone on the local market through LG U+ on Tuesday. The Y6 allows its customers to make free phone calls when connected to Wi-Fi, boasts a 360-degree panorama camera and includes face-recognition technology - all for 154,000 won, making it the cheapest smartphone in the local market.

“More and more consumers are appreciating Huawei products’ low prices, and that’s why we’re doing business with the company,” a spokesman for LG U+ said. “This smartphone is actually free of charge when you take into account government subsidies.”

Syma’s drones, Novelview’s Bluetooth speakers and UNIC’s micro-projectors are also very popular in Korea, and many Koreans have dubbed them “mistakes of China” as well.

Chinese auto brands are growing in popularity, too. China’s Sunlong Bus entered the market in 2013 and sold 100 buses that year. Since then, it has sold about 550 in Korea. Other automakers are preparing to enter the Korean market as well.

But this is just the beginning. The Chinese government have announced new initiatives to boost the economy, such as “China Manufacturing 2025” in May. The plans lay the groundwork for the nation to further develop as a global manufacturing superpower.

But it’s not just advances in production that are worrying Korean companies - it’s also the narrowing of the technological gap in the IT industries of the two countries. Korean manufacturers had a 2.4-year lead over Chinese companies in 2012, but that has been narrowed to 1.8 years as of last year, according to the Korea Institute of S&T Evaluation and Planning. In the energy industry, the gap is only a year, and China now leads in the aerospace industry.

“The government needs to ease regulations in order for industries to increase the amount they spend on R&D,” said Han Jae-jin, a researcher at Hyundai Research Institute. “Manufacturing companies also have to reform themselves [to compete].”