Hwang Jung-min, star of ‘The Himalayas,’ describes life on a pinnacle

Hwang Jung-min, star of ‘The Himalayas,’ describes life on a pinnacle 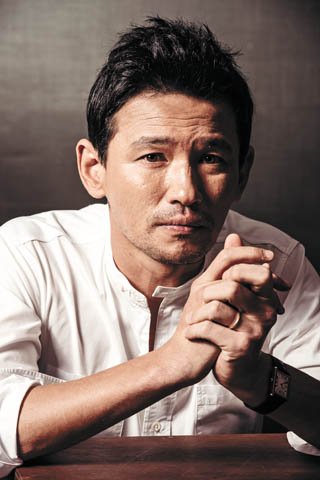 “The Himalayas” almost didn’t get made.

Directed by Lee Seok-hoon and released in theaters Dec. 16, the movie is based on the true story of mountain climber Um Hong-gil, played by Hwang Jung-min, who forms the Korean Human Expedition team to go to Mount Everest in the Himalayas.

But the group is not destined for the summit. Led by Um, the group is searching for Park Moo-Taek (Jung Woo), a fellow mountain climber who was reported as dead and whose body is missing in the Himalayas.

On a basic level, the film allows viewers to re-experience the dangerously ambitious journey of Hong-gil and the expedition group. But the film does more than just tell that story; it captures the sweat and tears of the climbers in dark times, but also highlights their shared adventures over the most rugged of landscapes.

In an interview, Hwang revealed that he didn’t expect to be part of the film. In fact, when Hwang was filming “Ode to My Father” (2014), it was announced that the production of “The Himalayas” had been canceled. Hwang has had close ties to its production company, JK Film, since his appearance in “Dancing Queen” (2012), also directed by Lee. He recalled consoling president Gil Young-min over drinks.

“To be honest, something was fishy,” Hwang said, smiling. “I told him repeatedly, just in case, ‘I’m not doing this film, by the way. It seems too hard. There’s no way!’ And yet, I got a call while filming ‘Veteran’ (2015): he asked if I wanted to be in the film.”

Hwang asserted that the scripts are not the most important thing to him these days. His standard for starring in a film is the people he’ll work with.

“Even if the plot doesn’t seem very well-developed, if the cast brings its fullest passion, it’s a guarantee that the film will turn out great. That’s why I decided to collaborate with Lee again. Since we worked together before, I knew how great it would be to work with him again.”

Q. It seems pretty easy to predict how the plot of “The Himalyas” will turn out.

A. The story’s arc does seem quite obvious. Not only is it based on a true event, but also there was a documentary on the same subject in 2005 [“Ah, Everest!,” an MBC special documentary program]. So we really had to dig in and wonder what exactly we wanted to bring to an audience that will have paid to see this film even though they already know the story. Things got pretty heated on the scene, actually, and we shouted at each other, “Why are we doing this if it isn’t different at all from the documentary?” 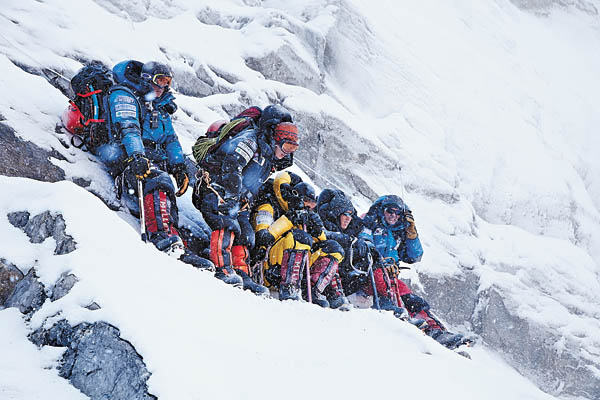 Scenes from the movie “The Himalayas” which stars Hwang. [CJ ENTERTAINMENT]

What do you think the film should deliver?

I think a film can best convey the emotions of the climbers and their magnitude. As an actor, I felt I should deliver the complex interweavings of camaraderie, regret and sorrow.

Were you worried at all about altitude sickness when you were filming in the Himalayas? For actors, the loss of control over one’s body could be their greatest fear.

Luckily, I was able to adapt to the environment. In fact, I would say that the responsibility I felt towards acting trumped my fear. In the film, I am the leader of the expedition. It was the same during production. I wanted to set an example for my junior colleagues, having them think, “If he can do it, so shall I.” And I was able to reach that stage during filming. But it turned out to be pretty lonesome for me.

I didn’t have a person to go to for consolation. After a day of filming, I would cry by myself daily. But it was a learning experience - it’s something that’s bound to happen as one grows older. In that sense, I could identify with what Um Hong-gil must have felt when he went through the struggle. When you’re high in the Himalayas, the question at hand is not how do you live, but would you live - or die? It’s unbelievable how fragile a human life can be, and that’s all the more reason that Um carried such responsibility for his friend and his group.

What did you talk about with Um when you met him in person?

We didn’t talk much. On the surface level, he is energetic and charismatic - the perfect company for drinks. But how I can put into words all that may be in him? That said, the mountaineers who helped us during filming insisted that Um and I have very similar personalities. Apparently, I curse just like him (laughs).


Thoughts on death must have been unavoidable during the production.

It’s no wonder that the mountaineers exude an air of bravery and wisdom. They have overcome many near-death experiences. I feel like I already adopted a whole new outlook on life: a human’s is a small existence. 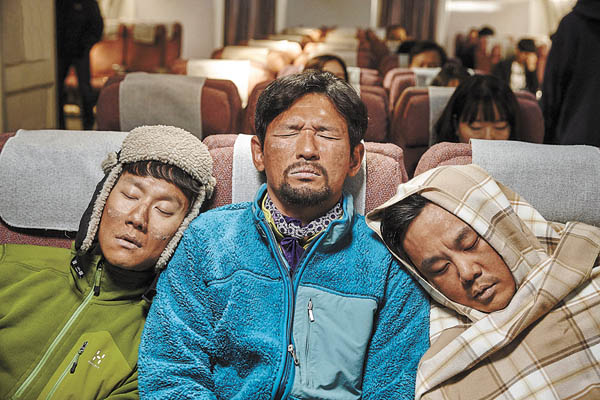 Scenes from the movie “The Himalayas” which stars Hwang. [CJ ENTERTAINMENT]

What else have you learned?

It’s been said that you examined your role multiple times. Why is that?

None of the staff or actors had experience in mountaineering films, so it was almost impossible to gauge what was good and what was bad. Even if we said, “OK,” at the spot, how would we know if that was the right call to make? But soon I figured that if we’re doing this, we might as well do it as if we’re making the first-ever mountaineering film. That way, we could raise the bar so high that the next production that attempts a film in the mountains would feel overwhelmed.

Coincidentally, “Everest” (directed by Baltasar Kormakur) was released in theaters in September. Did that make you nervous?

It seems a given that any Hollywood film would scare us (laughs). Seeing the trailer, the two films really did seem alike. There’s literally only one path that leads to the summit. So, honestly, how much of a difference would an angle make? Hiking outfits and the equipment seemed the same, too. But on another level, the two in fact tell very different stories. Sure, there are plenty of stories about people hiking to reach the summit - but not purely for the sake of finding a friend’s missing body! In this way, there’s something unbelievably amazing about Korean people. We’re one of a kind!

Following up on your roles in “Ode to My Father” and “Veteran,” your role in “The Himalayas” seems to confirm that you are a megahit actor.

I am not interested in that, regardless of the turnout of the movie and what stories or nicknames surface. Of course, I am happy if a movie is a box-office hit. But the film’s already done, so other than promoting it there is not much left for me to do. An actor is an actor. Does being cast in a hit movie make the actor good? And if in a flop, bad? So personally, I have no interest.

Are you not at all affected by the public’s interest in you?

I’m indifferent. Actually, I really don’t like being the center of attention, to the point that I stopped having birthday parties ages ago. Nowadays, I hate going to award ceremonies. It’s so embarrassing and uncomfortable when I’m revered for my name and status as actor Hwang Jung-min and not for the roles I play. I don’t think my prominence as an actor is solely based on my talent yet. In the cases of “Ode to My Father” and “Veteran,” I believe the audience applauded Deok-soo and Do-cheol, not me.

These days, you seem busy preparing for the musical “Orchestra Pit,” which you are both directing and playing the leading role. On top of that, you also have a promotional agenda for “The Himalayas” and filming of “Asura” (directed by Kim Sung-su, to be released next year). How do you keep going?

I just lose a little bit of sleep day by day. Since November, I’ve been devoting most of my attention to the musical, which I’ve been working on for the past five years. Theater directing is fun. I think my experience has been optimized due to my background in film. Normally, the stage setting is done, at the earliest, a week before opening, but from early this year I pushed the staff to finish the set design as fast as possible so that the actors can practice on a complete set. If you were to perform in the full set for the first time at an actual performance, how would it look to the audience? I couldn’t fathom it.

Do you have any interest in film directing?

Don’t you need to study for that? No thanks (laughs).

In what ways could “The Himalayas” bring solace to viewers?

Perhaps it shows a more positive way to see and treat people. I think the movie can renew the feeling of human love within people. It’s always been there, in us, but sometimes we lose track of it because we’ve become so busy. So this will be a good chance to get back on track with our loved ones.