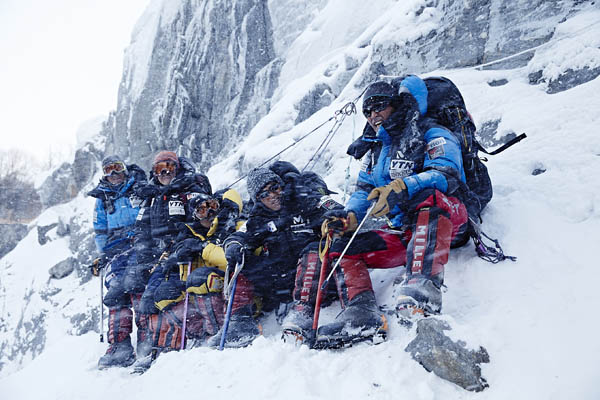 “The Himalayas”, based on the true story of Korean mountaineer Um Hong-gil, topped the weekend box office, outperforming strong candidates such as international phenomenon “Star Wars: The Force Awakens” and local film “The Tiger.”

According to the state-run Korean Film Council on Monday, the adventure epic directed by Lee Seok-hoon opened in first place with 1.1 million moviegoers, making 8.8 billion won ($7.4 million) in the third weekend of December.

The film has actor Hwang Jung-min of “Veteran” (2015) and “Ode To My Father” (2014) in the role of Um, who leads the so-called Human Expedition in which a group of hikers embark on a life-threatening journey back to the Himalayas to retrieve the body of one of their peers.

Actor Jung Woo plays the role of Park Moo-taek, a young aspiring mountaineer who dies on the Second Step - often dubbed the “death zone” - after failing to be rescued by his teammates.

In contrast to a record-breaking opening score in North America, “Star Wars,” directed by J.J. Abrams, fell a little short in Korea, debuting in second place.

The seventh installment of the legendary space odyssey attracted a little less than one million moviegoers from Friday to Sunday, making 7.9 billion won in Korean theaters. It took 33.3 percent of the weekend box office sales.

In third place was another anticipated big-budget Korean movie “The Tiger,” directed by Park Hoon-jung of “New World” (2013).

Set in the Japanese colonial era (1910-45), the film depicts a ruthless hunt by the Japanese military and local hunters to take down the last tiger remaining in Mount Jiri.

Veteran actor Choi Min-sik plays Man-deok who, against all odds, lives up to his faith of not disturbing the course of nature and learns to coexist with animals. It was seen by 483,603 moviegoers, making 3.8 billion won so far.

1. The Himalayas
2. Star Wars: The Force Awakens
3. The Tiger