President Park Geun-hye named a former transportation minister, Yoo Il-ho, as the new deputy prime minister for the economy in a reshuffle on Monday aimed at setting free Cabinet members who want to run in the April general election.

Rep. Kang Eun-hee of the ruling party was named minister of gender equality and family.

“Yoo served as the chief policy maker of the Saenuri Party, a member of the National Assembly’s Strategy and Finance Committee and head of the Korea Institute of Public Finance,” said Kim Sung-woo, senior presidential secretary for public affairs. “Recently, he was the transportation minister. Based on his ample insights into economic policies and the real economy, and his political capabilities, he is the right person to revitalize the economy by successfully implementing the government’s economic policies.”

Yoo is a two-term lawmaker from Seoul’s Songpa B district and a key ally of the president. He served as the minister of land, infrastructure and transport from March to November 2015. Yoo was also Park’s chief of staff when she was president-elect.

“I am honored to be nominated to this post, but I also feel pressure,” Yoo said. “It will be hard to successfully push forward a policy amid a difficult economic situation.”

Yoo said he will stick with the current government’s economic policies.

“President Park has maintained a consistent tone, so I won’t deviate much from it,” Yoo said. “After I pass the confirmation hearing, I will provide explanations in detail.” 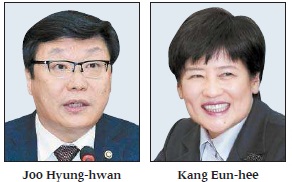 A native of Seoul, the 60-year-old Yoo graduated from Kyunggi High School and Seoul National University. He is also from a political family. His father, Yoo Chi-song, was president of the Democratic Korea Party.

After a career as a finance and tax expert, Yoo Il-ho first entered politics by winning a seat in the 2008 general election.

Yoo confirmed on Monday that he won’t seek re-election in April.

All five outgoing ministers, including Choi Kyung-hwan, the current finance minister, are expected to run in April. Of the five, three are incumbent lawmakers of the ruling party.

Kim said Lee, the nominee for education minister, was a seasoned professor with 20 years of teaching at Seoul National University’s College of Engineering. His understanding of the country’s education system will be instrumental in bringing about necessary changes to schools, Kim said.

The president chose Hong and Joo for their professional experience and insights, Kim said. Kang, a businesswoman-turned-lawmaker, was selected as the new gender equality minister for her vision to create new jobs for women, according to Kim.

The nominees will go through confirmation hearings at the National Assembly, though approvals are not required for appointments.

While the ruling party supported Park’s choices, the main opposition New Politics Alliance for Democracy (NPAD) criticized the president for carrying out a reshuffle for the purpose of the April general election.

“Yoo was the transportation minister, but he stepped down [last month] to run in the general election,” NPAD spokesman Kim Sung-soo said. “Only after one month, he was recruited again for another post. It is already known that Park has very few people around her, but it is unbelievable if she really has no one else to use.”

The NPAD questioned the professional capabilities of all the nominees and vowed to scrutinize them thoroughly at confirmation hearings.

Park also named lawyer Sung Yung-hoon as the new head of the Anti-Corruption and Civil Rights Commission on Monday. The position has been vacant since Lee Sung-bo’s three-year tenure expired earlier this month.