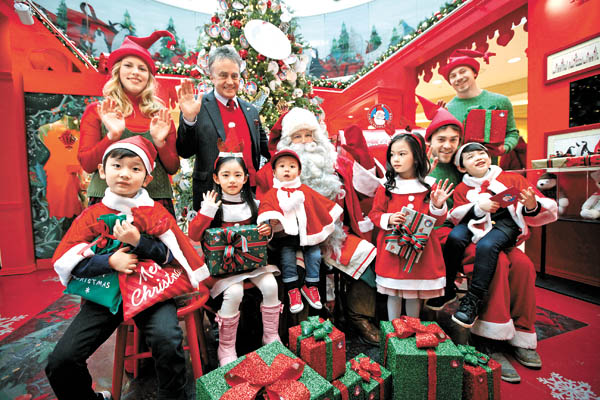 As Christmas draws near, retailers are seeking to tap into the holiday mood by offering diverse discounts and promotions. This year, big supermarket chains are focused on discounting food, wine and treats often served during Christmas as many people stay home to throw parties.

E-Mart, the top discount supermarket chain, will slash prices of wine, cheese and prepackaged food boxes for party throwing through Dec. 30. For wine, discounts will go up to 70 percent of the original prices. Discounted wines include Gosset Excellence Brut, Chateau Palmer and Chateau Brane Cantenac.

The chain will also offer up to 50 percent off on cheese products often paired with wine at parties.

E-Mart said December is the month that showed the highest sales of cheese in 2013, an indication that many people serve cheeses at year-end events and parties.

If a customer purchases a cheese product with wine, he or she can get an additional 10 percent discount.

E-Mart added new food items for home parties to its food specialty store brand Peacock. Peacock products do not require complicated recipes, and some can be instantly cooked with hot water for a simple meal.

More and more younger people have parties instead of going to restaurants to gather with friends to mark the end of the year.

Lotte Department Store will provide up to 80 percent discounts on various wines including Alpaca and Alicanto.

The department store will also target parents preparing to buy Christmas gifts for their kids. Toy brands such as Disney and Lego will have discounts of 20 to 50 percent.

Hyundai Department Store will launch different events for parents and kids to enjoy. Its store in Jung-dong, Gyeonggi, will offer an entertainment center called KidZania, which has mock workplaces for children so they can experience such professions as news anchor, nurse, doctor and pilot. The center is in the store’s culture hall from Dec. 24 to Jan. 3.

For young grown-ups, other downtown areas are particularly popular during the Christmas season.

The Hongdae area in northwestern Seoul and Gangnam Station in southeastern Seoul were picked as the two hottest places in Seoul to spend Christmas and year-end holidays.

According to a survey taken of some 2,200 people by online job portal Job Korea, young people in their 20s picked the Hongdae area as the hottest in Seoul, while those in their 30s and 40s said they want to hang out near Gangnam Station.

Other popular places mentioned were Myeongdong, northeastern Seoul; Garosu-gil in Sinsa-dong, southern Seoul; Gyeongridan-gil in Itaewon; Daehangno and Konkuk University Station, both in the northeastern part of the city.

About 62 percent of survey participants answered that they consider if there are many matjip, which literally means “delicious restaurants” in Korean, as the most significant factor.

Since the survey allowed multiple answers, nearly 40 percent said convenient public transportation is another significant factor. Other factors considered important were shopping infrastructure, if the area attracts young people, and the interior and exterior decorations with holiday mood.

Forty-four percent of survey participants said they usually choose to hang out at places that are usually 30 minutes to an hour away from home via public transportation. Another 39 percent said they are willing to travel more than an hour.