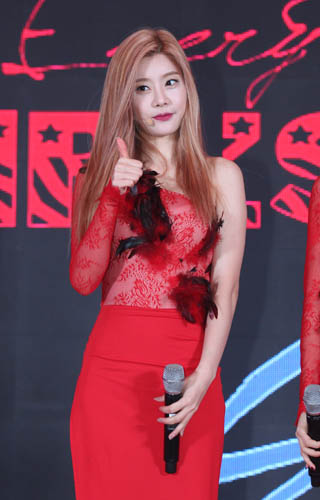 Sojin of the group Girl’s Day has produced an original song for the soundtrack of the popular cable drama series “Reply 1988,” the band’s agency announced.
Dream Tea Entertainment, which represents Girl’s Day, said Sojin had recently finished recording “Everyday With You,” a cover of the 1985 hit by rock band Deulgukhwa. The new version will be unveiled Dec. 26.
“Sojin was thrilled to be able to contribute to the soundtrack because she is a huge fan of the drama series,” the agency said in a press release Thursday.
The singer’s bandmate, Hyeri, plays a lead role in the show.
“Sojin was very happy to sing a song for Hyeri’s drama series,” the statement read.
The retro-themed drama series, set in 1988, features classic songs from the 1970s and ’80s remade by current artists.
So far, all the covers from the soundtrack have landed on the top 10 most-streamed music charts on major music portals.
By Sung So-young