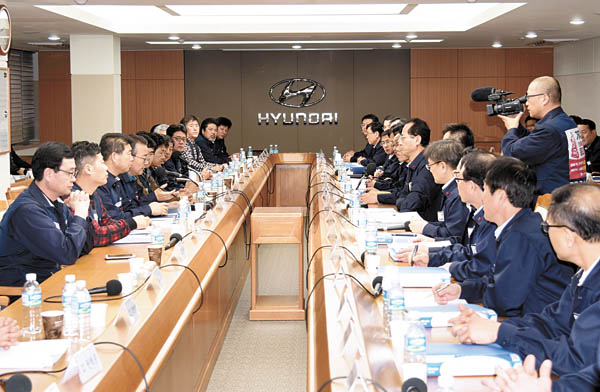 Hyundai Motor executives and the leaders of its labor union discuss this year’s wage proposals at the automaker’s Ulsan Plant on Thursday. [NEWSIS]

Looming fears of economic downturn led Hyundai Motor’s hardline labor union to step back and reach a tentative agreement with the company on Thursday.

Originally, the country’s largest domestic labor union had asked the company for a 7.8 percent or 159,900 won ($136.6) raise over in their monthly base pay from a year ago. However the two agreed to increase monthly salaries by 4.2 percent or 85,000 won with a bonus of 400 percent, plus 7 million won, which includes giving 20 shares of the company to each worker.

The agreed terms are weaker than last year, which included conditions such as paying 450 percent of monthly pay plus 8.7 million won as a bonus.

The union and the company reached an agreement as they both wanted to wrap up the painstaking negotiations that have been badly influencing the company’s production.

“We are not 100 percent satisfied with the company’s offers, but many of the members wanted a settlement within the year, which also was one of the major pledges of the executive board,” said Park Yoo-ki, the union leader. “It seemed logical to make settlements at an acceptable level to help boost the local economy and aid the company’s performance.”

There were 28 rounds of negotiations in last 18 months, although the two parties have not met for the past two months.

However, with the newly elected leader, Park Yoo-ki, the company resumed negotiations on Dec. 15. The tentative agreement was reached after only 10 days of talks.

During negotiations, talks broke down several times which led to the union launching partial strikes including the one staged on Dec. 16.

Excluding sales of Kia Motors, Hyundai’s auto sales worldwide have dropped roughly 1 percent to 4,448,000 cars from a year ago. With a slumping Chinese economy, the automaker’s largest export market, next year’s outlook is even grimmer. Moreover, a stable working environment was necessary for the growth in sales of the newly launched EQ900.

However, there are still a number of unresolved issues on both sides. First, the tentative agreement needs approval from more than half of the company’s union members. A ratification meeting is to be held next week. Second is the contentious peak wage system and the ongoing wage structure.

The two sides agreed to postpone talks on these sensitive issues until next year.

Troubled shipbuilder Hyundai Heavy Industries (HHI) also managed to reach an agreement with its labor union on Thursday on wage issues. The agreed details include a freeze of base salary and bonus payments of 100 percent of salary plus 1.5 million won.

“Considering the crisis in the overall shipbuilding industry and other diverse difficulties the company is facing, we decided to accept the company’s offer though it lags in some of our demands,” said the head of the HHI labor union.

A company spokesman said, “We feel thankful that the union agreed to the wage deal, since the consensus was necessary for the company to aim for a surplus next year.”

The tentative agreements reached by the two companies are expected to bring positive influence to the regional economy and industry as a whole.