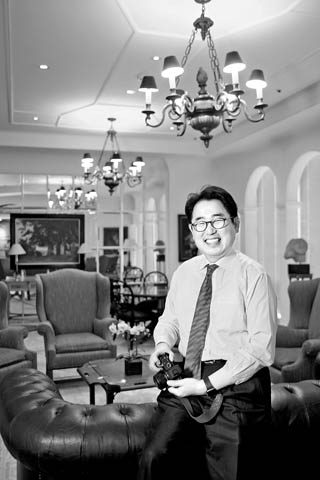 Baek Seung-woo has worked for more than 30 years as a hotelier, but he quickly found that there was a lack of quality information for foreign tourists about Korea and its culture.

“I couldn’t find a book that gave definitive answers to the questions many tourists have,” he said.

Those include: Where can I go in Seoul for a nighttime stroll? Is there a beauty salon for English speakers? During national holidays, why is the city so empty?

According to statistics from the Korea Tourism Organization, more than 12.1 million foreign tourists visited Korea this year from January until November. 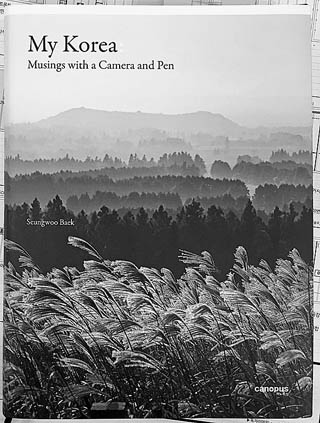 Some likely asked the questions listed above, and it’s possible they didn’t receive an adequate answer.

So Baek, 57, the executive director of the Grand Hyatt Seoul who also serves as the North Asia finance director for the Hyatt Hotels Corporation, decided to publish the English-language guidebook, “My Korea,” which includes tourism information as well as the answers to questions tourists often ask.

The publication contains essays and photos posted on his Facebook page over the past two years.

Seoul’s five-star hotels mostly house history books pertaining to Korea’s ancient palaces or cultural heritage, but there are no practical guidelines for foreign tourists to refer to when they encounter anything out of the ordinary.

“My Korea” answers the most frequently asked questions Baek has often heard from his foreign acquaintances and customers.

The book serves as an introduction to daily life in Korea and includes lessons on Korean table manners and customs; birthday traditions, such as the consumption of miyeokguk (seaweed soup); Korean job titles and how to address colleagues; and even soju, a preferred drink in Korea.

It also contains the story behind jajangmyeon (noodles with black bean sauce) and interesting facts about the jjimjilbang (a Korean sauna) and why visitors to the spa wear towels on their heads that are shaped like the curled horns of a ram.

Also, “My Korea” includes information for tourists in Seoul and Gyeonggi, and a photograph is placed beside each short essay.

To answer each question to the best of his ability, Baek even applied to become a licensed palace guide, known as a cultural heritage commentator.

That required 10 months of education trying to deliver as much historical information as possible and photographing every inch of the city’s palaces.

He is currently studying the history of Seoul Seonggwak, the city fortresses that span 18.5 kilometers (11.5 miles).

The hotelier describes himself as something of a perfectionist. And that is best illustrated in his approach to learning photography.

He initially studied the aesthetics of proper photography before moving on to the techniques.

This also isn’t the first time Baek has published a book.

In 2013, he compiled a collection of photo essays, “The Way to Work: Yaksudong Street,” which contains a collection of short essays he wrote on his blog, accompanied by photographs taken as he walked from his house in Yaksu-dong, central Seoul, to the Grand Hyatt Seoul.

“Ten years ago, I bought a compact camera just by chance, and from then on, taking photographs became my hobby,” he said.

The 57-year-old majored in economics at Washington University in St. Louis, and after his employment at the Hyatt Corporation, he went on to attend graduate school six times, receiving three master’s degrees and two doctorate degrees. He just finished all his coursework for his third Ph.D., seeing it as a way to broaden his specialties.

Amid building his career, taking photographs has served as an extra side job. On the weekends, he strolls around tourist sites and takes photos. And during the weekdays, Baek wakes up at 5 a.m. to upload short posts in English on his Facebook page. Then, at 6 a.m., he walks to work.

In addition, he has presented two solo exhibitions, inspired by his hotelier career.

The first, “In the Hotel,” is a collection of photographs he has taken from inside various hotels, while the other, “The Window,” is comprised of photos he took inside the hotels looking outward.

All were taken during his lunch period or on business trips.

“Taking photos, writing essays and studying cultural heritage are all part of my responsibilities as a hotelier,” Baek said. “I am doing my utmost to help provide foreign tourists with an unforgettable impression of Korea and greatest satisfaction on their travels.”

Baek’s “My Korea” will be released in January on Amazon. He will also present his solo exhibition, “The Window,” in Paris next July.