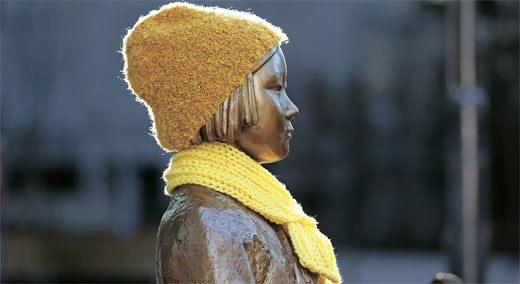 A statue of a girl symbolizing the so-called comfort woman, women forced to be sex slaves by imperial Japan, sits across from the Japanese Embassy in Seoul. [PARK JONG-KEUN]

Foreign ministers of Korea and Japan will meet Monday in Seoul to try to settle the long-running diplomatic battle over apologizing and compensating victims of the Japanese military’s wartime sexual slavery.

The foreign ministries of Seoul and Tokyo announced Friday that Korean Foreign Minister Yun Byung-se and his Japanese counterpart Fumio Kishida will meet Monday afternoon in Seoul. Ahead of their meeting, a director-level consultation will take place on Sunday in Seoul.

For years, Seoul and Tokyo have failed to find a resolution to the issue of the “comfort women,” thousands of women and girls forced into Japanese military brothels during World War II. Japanese media reported Thursday that Prime Minister Shinzo Abe ordered Kishida to go to Seoul before the end of this year to find a settlement.

Yun held a strategy session with Korean officials throughout Thursday and the meeting didn’t end until around 1 a.m. Friday.

“If this were a game of go, this would be the concluding move,” an official of the Korean Foreign Ministry told the JoongAng Ilbo. “What’s left now is whether you win or lose by a half point.” Another government official said the two sides have presented all options through 11 rounds of director-level talks over the past year.

Japanese Foreign Minister Kishida vowed to put “all wisdom and sweat” into resolving the issue in a news conference earlier Friday.

The foreign ministers’ talks are seen as an effort by Seoul and Tokyo to conclude the matter before the end of this year. In their first summit on Nov. 2, 2015, President Park Geun-hye and Japanese Prime Minister Shinzo Abe agreed to speed up negotiations to resolve the comfort women issue, “keeping in mind that this year is a turning point marking the 50th anniversary of normalization of ties between Korea and Japan.”

Since April 2014, foreign ministries of the two countries had 11 rounds of director-level talks to settle the issue, but little progress was made.

While Korea demands Japan admit its legal responsibility for the wartime sexual slavery of the Korean women and issue a truthful apology in addition to restitutions, Japan has insisted that the issue was already resolved through a 1965 claims settlement agreement. As Tokyo refused to accept legal responsibility for the sexual slavery and tried to settle the issue by offering “humanitarian assistance” to the comfort women, the negotiations repeatedly broke down.

Diplomatic sources in Seoul said Japan would provide money to the victims using its state budget under the title of monetary atonement, not formal reparations. In 1995, Japan sought to create a fund to pay the victims, but the former comfort women rejected the plan because the money didn’t come from the Japanese government but from a humanitarian fund-raising movement.

“An act by a government using the state budget can be interpreted as an act accompanied by its legal responsibility,” said Lee Won-deog, director of the Institute of Japanese Studies at Kookmin University. “If the money is not clearly labeled reparations, the Japanese government can explain to rightists in the country that it was providing humanitarian assistance to the victims because there was a shortcoming after the 1965 settlement. A gray area can be created to allow Seoul and Tokyo to interpret the measure the way each needs.”

Seoul was also adamant that an apology must be issued by Abe.

“A historical record of a Japanese state leader’s apology is needed,” said a Foreign Ministry official. “If Japan agrees to this, we can negotiate on the format and specific wordings.”

The official also said that will allow President Park to reciprocate by confirming a final and complete settlement of the comfort women issue, as Japan wishes.

Japan has also demanded the removal of a comfort woman statue across from the Japanese Embassy in Seoul. Named the Peace Monument, the bronze statue of a girl was financed with public donations.

The Korean government has made clear that the statue cannot be a subject of negotiation.

“It has already become a symbol of the victims’ pains,” said a government official. “It’s not something we have power over.”

The Japanese media also reported Friday about possible resolutions. The Nihon Keizai Shimbun reported that the Japanese government is considering a plan in which Abe send letters to surviving victims to discuss Japan’s responsibility and express an apology, while the Japanese ambassador to Korea will pay a visit to them.

Kyodo News Agency and the Yomiuri Shimbun reported that Tokyo wants to strike a deal at the foreign ministers’ talks and formally confirm it by arranging a Park-Abe summit in Japan early next year.

“Let’s wait and see what package Japan will present,” a government official said.

Speculation was high that Seoul and Tokyo will find a settlement to the issue after the November summit between Park and Abe. Observers said the timing was ripe as a series of sensitive issues between the two countries were recently resolved.

Tatsuya Kato, former Seoul bureau chief of Japan’s Sankei Shimbun, was acquitted last week of a charge of defaming President Park after he raised suspicion about her whereabouts during a ferry disaster in 2014. On Tuesday, the Korean prosecution decided that it won’t appeal.

The Constitutional Court decided Wednesday that it won’t rule on a complaint that the 1965 claims settlement between Korea and Japan had violated rights to proper compensation.

“It remains to be seen if the foreign ministers can find a resolution to the issue,” a Seoul official told the JoongAng Ilbo. “But if Japan shows some sincerity, it will give us some room to maneuver. In the end, we still need political decisions by the leaders.”

It will be Kishida’s third trip to Korea since he took office. He came for Korea-China-Japan trilateral foreign ministerial talks in March and for a trilateral summit in October this year. It will be his first visit for a bilateral meeting with Yun.

In June, Yun visited Japan and invited Kishida to visit Korea before the end of the year.