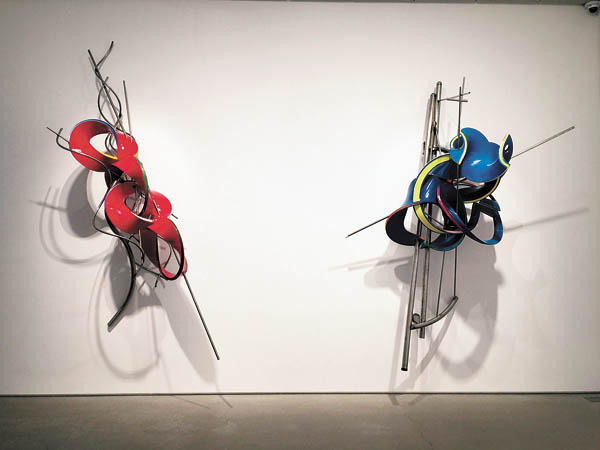 Now the recent sculptures by the American artist Frank Stella, 79, are on display at the Daegu-based Leeahn Gallery’s central Seoul branch.

Stella is often noted as an important 20th-century painter, related with minimalism in art history books. But many Koreans know him as the sculptor who created “Amabel: Flowering Structure,” now in front of the steelmaker Posco’s headquarters in southern Seoul.

The large-scale metal sculpture was installed there in 1996, bringing about hot debate between those who hated its appearance and those who defended the art - maybe the first public art controversy in Korea.

Unlike the “Amabel” sculpture familiar to Seoulites, 12 of the 13 pieces now on view at Leeahn Gallery hang on the walls, showing their relation to Stella’s paintings. They are part of the artist’s “Bali Pieces” series created between 2003 and 2009 and his “Scarlatti Sonata Kirkpatrick” series created since 2006.

“Stella developed painterly reliefs, in which the painting protruded into the three dimensions, since the 1970s,” explained Ryu Doo-hyun, curator of the gallery.

Each sculpture of the “Scarlatti” series, inspired by the 18th-century Italian composer Domenico Scarlatti’s sonatas, consists of a 3-D-printed body and rhythmically bent steel tubes. The gallery quoted Stella as saying, “If you follow an edge of a given work visually, and follow it through quickly, you find the sense of rhythm and movement that you get in music.”