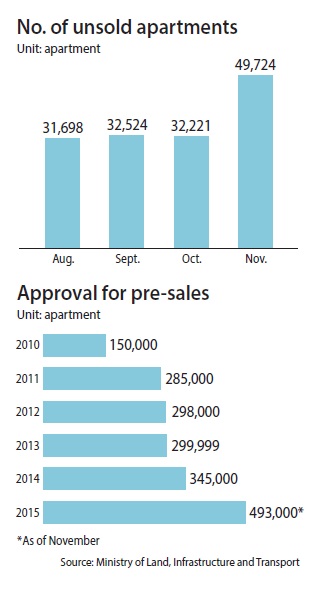 The number of presale apartments that failed to find buyers soared 54.3 percent in November compared to the previous month.

This is the sharpest increase in unsold apartments since June 2008, which raises concerns of a rapidly cooling property market and a growing housing oversupply.

According to the Ministry of Land, Infrastructure and Transport on Tuesday, the total number of unsold apartments that are to be built next year stood at 49,724 last month, up from 32,221 in October. The month-on-month growth in unsold units is the largest in seven years, when the U.S.-triggered global financial crisis erupted.

In Korea, apartment units are sold before they are constructed to finance the construction project.

Last month, the number of apartments that failed to find a buyer significantly increased especially in the greater Seoul area, where it surged 70.6 percent compared to the previous month to 26,578 units. Yongin, Gyeonggi, had the largest number of apartments left available, totaling more than 4,200 units.

The rest of the country saw an increase in the number of apartments left unsold, though it was less than the greater Seoul area at 39.1 percent, or 6,501 units more, compared to the previous month’s 23,146 units.

Meanwhile, the government approved a total of 84,000 apartments to be put on sale in October and another 73,000 in November. The total number of approved presales hit an all-time high of 493,000 throughout the year since 2007.

The latest figures by the Land Ministry raise concerns over the contrasting views of Yoo Il-ho, the nominee for finance minister.

On Dec. 21, when he was nominated, Yoo told reporters the housing market hasn’t yet reached oversupply. “[The housing market] wouldn’t be in oversupply,” Yoo said. “And there is no need to be cautious about it.”

That immediately sparked a controversy, since it was the opposite opinion of current Land Minister Kang Ho-in’s view. Kang had said earlier that new apartments that have been approved for construction this year might lead to an oversupply around 2017.

The Land Ministry expects companies to adjust their construction plans for the upcoming months to help stabilize the overall market.

“As the number of presales is expected to decline in December, unsold ones will also start decreasing,” a ministry official said. “The construction industry would take the latest numbers as a signal for self-adjustment.”

Given that the average volume of unsold apartments stands at 77,000 for the period between 1993 and October 2015, the November figure is not comparatively high.

Some market watchers are worried the oversupply of new apartments and unsold units will spike next year as people stop buying houses with loans when the interest rate starts to rise.

“As the presale volume hit the largest this year, there are rising concerns about a surge in empty apartments after construction is completed two or three years later,” said Yoon Ji-hae, a researcher at Real Estate 114, a property market information provider.

“The number of empty apartments is forecast to be the highest in 2017, which can trigger a number of social and economic problems.”