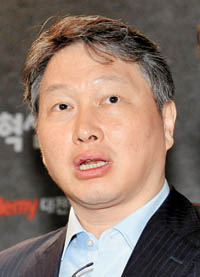 SK Group Chairman Chey Tae-won dropped a bombshell on Tuesday by announcing he had an extramarital affair that resulted in a daughter being born out of wedlock six years ago.

He said despite his best efforts, he failed to save his marriage to Roh Soh-yeong, the Art Center Nabi director more famously known as the daughter of former President Roh Tae-woo. He said he wants a divorce.

The confession by Chey was unprecedented in the Korean context. Although there have been plenty of rumors about extramarital affairs by major Korean business tycoons, Chey is the first to go public with his private situation. The disclosure was made in a letter he wrote and sent to local newspaper Segye Ilbo on Saturday. It was published on Tuesday.

“Today, I want to make a shameful confession not as a businessman but as a human being,” the 55-year-old chairman of the nation’s third-largest conglomerate wrote in a three-page letter.

“As was rumored, my marriage wasn’t easy. I and director Roh tried to turn around a soured relationship for a long time, but we realized that we can’t live together anymore since we have very different characters. We were separated for a long time.”

Chey said he decided to go public because he wants to take care of his young child and her 39 year-old mother, whom he said he was very much in love with.

The woman was only identified by her surname Kim.

“Years ago, director Roh and I started discussing getting a divorce, but the legal process was delayed since the company was subjected to a tax audit and other complicated matters,” Chey wrote in the letter. “In the meantime, I met a person who helped me overcome such hardships and [I] started dreaming of having a life together with her. I then got a baby a few years ago.”

According to sources, Chey met Kim after he served seven months in jail for SK Global’s 1.5 trillion won ($1.3 billion) accounting fraud in 2003. It is not known what Kim does for a living, but she reportedly divorced a husband in New Jersey in recent years.

Kim gave birth to Chey’s daughter in 2010, and the two are currently residing in Hannam-dong, central Seoul. Chey was sentenced to four years in prison in 2013 for making illegal investments using funds belonging to SK affiliates in 2011. It is said Kim visited Chey in prison. He was pardoned in August.

Although Chey wants to end his 27-year marriage to Roh, the daughter of the former president seems to have different plans.

A person close to Roh told the JoongAng Ilbo on Tuesday that Roh said, “I will stand firm to protect my family,” indicating that she might not agree to the divorce. “Our children don’t want a divorce either,” Roh reportedly added.

Chey and Roh met when the two studied at the University of Chicago and got married the same year the wife’s father was inaugurated president of the country in 1988. The two have a son and two daughters, all of whom are in their 20s.

After Chey’s confession, concerns immediately swung to the ownership, SK Group and inheritance issues. According to data compiled by Bloomberg, Chey’s fortune is estimated at 4.9 trillion won. Chey owns a 23.4 percent stake in SK Holdings, which is worth roughly 4.2 trillion won, and some real estate and shares in other affiliates. SK Group in August completed its conversion to a holding company structure through a merger of SK Holdings and SK C&C. Previously, Chey controlled the group through SK C&C, but he carried out the holding company structure in order to strengthen his control.

Another concern is how Chey will divide his property if he divorces Roh. Under current law, a spouse is able to take nearly 50 percent of the property when a marriage has lasted over 20 years. If the spouse has contributed to the fortune, that percentage can rise. Chey is also at a disadvantage because he is responsible for the breakup.

“Roh might demand more than 50 percent of Chey’s property, since it is known that SK Group was helped by former President Roh Tae-woo in its communications and energy businesses,” said attorney Lee In-cheol from the Win law firm in Seoul. “But it has been very rare for a person leaving a chaebol family to take 50 percent. Most of them received payoffs of several billion won.”

After the letter was published, the public had little sympathy for Chey. “Chey should thank the government that it doesn’t charge people for adultery anymore,” a message posted on Twitter read.

“He is speaking like he is a good man who wants to protect a woman and a baby, but the truth is that he just cheated on his wife.”