Try something different this New Year

Try something different this New Year

The year 2015 is coming to an end and there are various ways to celebrate the arrival of the new year. Partying all night with friends or counting down at Bosingak Belfry in central Seoul for the annual bell-ringing ceremony are some of the options.

But don’t forget that art centers throughout the capital are offering New Year’s Eve concerts, which end with a midnight countdown and spectacular fireworks at some.

This year, the National Theater of Korea (NTOK) in central Seoul is offering more choices for theatergoers to celebrate the New Year.

Three performances of different genres will be staged at all three theaters at the NTOK: KB Haneul Theater, Daloreum Theater and Haeoreum Theater . 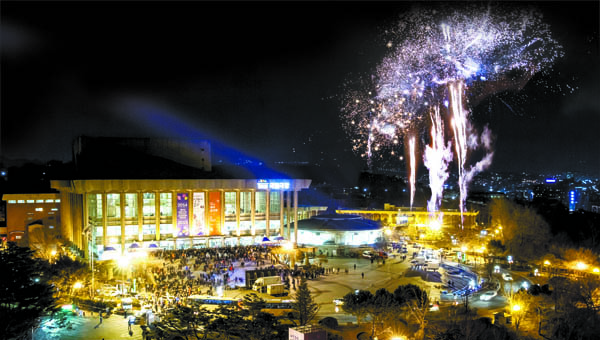 The three New Year’s Eve performances at the National Theater of Korea will finish with a countdown and fireworks. [NATIONAL THEATER OF KOREA]

Every year, the NTOK’s “New Year’s Eve Concert,” which will be held at the KB Haneul Theater this year, sells out, but the Korean traditional performances it presented such as pansori (traditional narrative singing) mainly attracted the older generation. In order to appeal to a broader audience this year, the theater decided to turn the concert into an upbeat party-like event for the young. The concert starts at 10 p.m. and young and trendy artists including rapper ZICO, rock band Guckkasten and gugak (traditional music) band Baraji will collaborate to “turn the concert into a party,” according to the theater.

“We wanted to add variety to this year’s performances presented by the National Theater of Korea,” said an official from the NTOK. “That’s why we decided to take the New Year’s Eve concert into the dome theater, which is the KB Haneul Theater. When the countdown starts, the ceiling of the dome theater will open to allow the audience, who will be all sweaty from dancing with the artists, to see the New Year fireworks outside.

“We wanted to break the custom we had for many years of having a quiet and classical New Year’s Eve concert where audience only sits in the auditorium and watches the artists,” she continued. “We wanted some interaction.” Tickets to the concert costs 50,000 won ($43).

At the Daloreum Theater, a pansori performance will be held starting at 9 p.m. for three hours for those who are more into traditional music.

Pansori master Ahn Sook-sun and her students will stage a full-length “Jeokbeokga,” which is a rare opportunity for the audience as well.

“Jeokbeokga” is not only the least-frequently sung pansori among the five works of pansori in Korea, but it’s also rarely sung in its entirety due to its duration and level of difficulty. Tickets for the pansori performance costs 30,000 won. When the performance ends, the audience can go outside to enjoy the fireworks after the countdown.

Meanwhile in the Haeoreum Theater, a performance of madangnori (traditional Korean outdoor performance) called “Chunhyang is Coming” will be staged beginning at 8 p.m. Although the show has been ongoing at the theater since Dec. 16, the theater said it will continue on the eve of the New Year so the audience for this show can enjoy the countdown and the fireworks, too.

This madangnori, which is comical and based on the traditional love story of Chunhyang and Mongryong, is said to be very popular among those in their 40s to 60s. Tickets range from 30,000 won to 70,000 won.

The Sejong Center for the Performing Arts in Gwanghwamun, central Seoul, does not have fireworks, but it has prepared two concerts titled “2016 Present” that will start at 7:30 p.m. for those who can’t stay up until midnight for the countdown and 10:30 p.m. for the night owls.

Down south of the river at the Seoul Arts Center (SAC), the annual New Year’s Eve concert will be held at 9:30 p.m. in the Concert Hall.

Violinist Kim Bomsori and flutist Jasmine Nakyung Choi will stage a classical night for Seoulites who want to end the year on a calm note. Maestro Lim Heon-jung will conduct the Korean Symphony Orchestra for the concert.

According to the SAC, in the first part of the concert, the musicians will start off with Mahler’s “Adagietto” from Symphony No. 5, which is very peaceful and familiar to Korean ears, “so that they can feel calm and have time to look back on the year.” The first part of the concert will end with violinist Kim performing Bizet’s “Carmen” Suite No. 1.

The second part will begin with the more cheerful tune of Tchaikovsky’s “Polonaise” from “Eugene Onegin.” Flutist Choi will play the flute for the violin part in this piece.

After the concert, the audience will be ushered to the outdoor plaza together with the musicians for a countdown and the SAC’s signature New Year’s Eve fireworks, so dressing warm is a must. Tickets range from 30,000 won to 80,000 won.