2016 promises to be uncertain year for local economy

2016 promises to be uncertain year for local economy 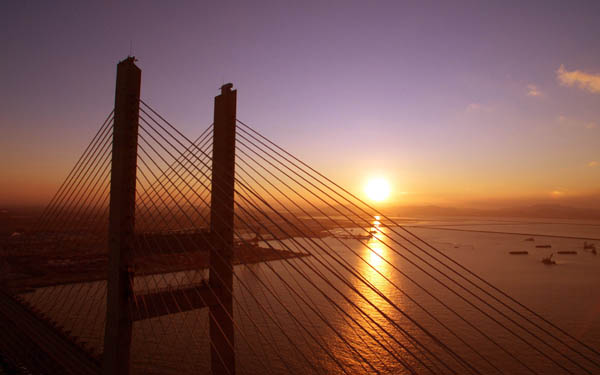 A new day -The sun peeks above the horizon behind the Seohae Bridge, which resumed operations on Dec. 19. Three cables supporting the bridge were damaged on Dec. 3, by a fire that was allegedly caused by lightning. [NEWSIS]

At the dawn of a new year, hopes for the Korean economy in 2016 are high - but expectations are tempered.

A year ago, many were confident in an economic recovery thanks to government efforts such as a supplementary budget and aggressive interest rate cuts during the second half of 2014, plus the emergence of new technologies including financial technology, or fintech.

This year the biggest certainty is that nothing is certain.

Even outgoing Finance Minister Choi Kyung-hwan acknowledged the uncertainties. In a mid-to-long term economic review made last month, Choi said, “Although recently our economy has been showing signs of recovery largely centered on the domestic economy, uncertainties still remain at large.” 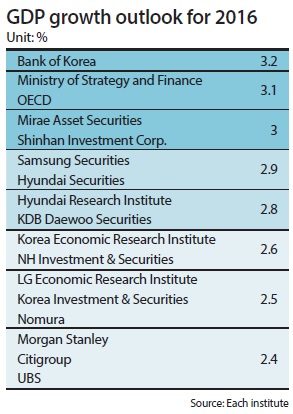 Although Korea is expected to post a record current account surplus this year, it may miss its target of 3 percent growth due to continuing weakness in exports, still the driving force in the economy.

Companies from across the business spectrum including manufacturers and financial firms are already undergoing corporate restructurings equivalent to the level of the late 1990s financial crisis - modern Korea’s biggest economic crisis. Not even Samsung Group is exempt from the urgent need to focus on business areas that are most promising and walk away from anything else. It has been selling affiliates considered non-essential, merging overlapping affiliates and departments and even laying off mid-to-high level employees. It has been said that 20 percent of mid-and-high level officials at Samsung Electronics have retired.

Doosan Group made headlines last month when it started laying off newbies who worked for less than a year. After public opinion turned against the heavy industry conglomerate, Doosan Group Chairman Park Yong-maan personally made an apology and promised it wouldn’t happen again.

Major corporate restructurings are expected to continue this year as companies search for new areas of opportunity, inevitably labeled growth engines in Korea.

The global economy remains the biggest risk factor for Korean GDP growth. Although the U.S. economy is steadily recovering with the U.S. central bank expected to gradually increase its key interest rate to 1.25 percent this year, the rest of the world continues to struggle. Europe is stuck in low growth in the 1 percent range while China’s growth is decelerating.

While local consumption has recently been improving, many believe it to be a temporary phenomenon based on government-engineered retail discount promotions. Korea’s ever-growing household debt is also expected to hold spending from increasing.

The year of uncertainties is felt in forecasts made about the main stock exchange.

Local brokerage firms last month projected the Kospi this year to move between 1,700 and 2,300. That’s a huge range, which means even brokerage firms are unsure which direction the stock market will be heading.

While some analysts believe Seoul’s primary market will be stuck in a limited range like this year’s, they are open to the possibility of the market retreating significantly due to the gradual hike in U.S. interest rates as well as the slowing Chinese economy.

will spill over to the real economy,” said Kim Hak-gyun, an analyst at KDB Daewoo Securities. “Another burden is the corporate restructuring in Korea, as well as the ongoing deceleration of the Chinese economy and a foreign exchange crisis in emerging markets.”

KDB Daewoo Securities offered the most pessimistic projection for the Kospi as it expects the index to fluctuate between 1,700 and 2,150.

The biggest problem is a decline in Korea’s potential growth rate. This is the maximum growth rate in the mid-to-long term that a country can expand when employing all of its production resources including labor and capital without stoking inflation.

The Korean central bank last month announced the country’s potential growth rate range is between 3 percent and 3.2 percent for the period between 2015 and 2018. This is a drop from the previous outlook for 2013 through 2015, which was between 2.5 percent and 3.5 percent.

The bank also lowered its inflation target for 2016 through 2018 to 2 percent from the previous range of 2.5 percent to 3.5 percent.

That acknowledges the fact that Korea is now officially in a state of low-growth and low-inflation. Yet the government and the central bank remain optimistic that the Korean economy will register growth of more than 3 percent this year.

But other think tanks like LG Economic Research Institute and NH Investment & Securities are betting on 2.5 percent.

“We’re in a situation where the domestic economy is in a stalemate while there are still huge uncertainties in the global market,” said Park Jeong-woo, an analyst at Korea Investment and Securities. “There are no countermeasures that could turn around all of these adversities and as a result we won’t be able to avoid low-growth of mid-2 percent.”

LG Economic Research Institute said the economy has no new factors to push up its economic growth.