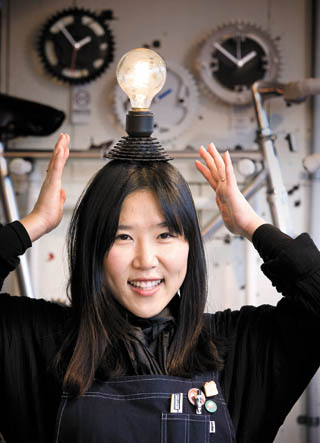 Yoo Se-mina, 30, a culture designer, poses with a recycled lightbulb made out of an old bicycle. Her goal is to make and sell chic recycled products with a long lifespan. [KWON HYUK-JAE]

Yoo Se-mina, 30, a designer and CEO of the Object stores in Seoul and Busan, is one such innovator. She sells redesigned recycled products, a process known as “upcycling,” in which useless, unwanted items are turned into quality environmental-friendly goods.

At 27, she took the 100 million won ($85,251) she had saved from working in the clothing business and decided to put it toward becoming what she calls a “provider of ethical consumption,” to help spread a culture in which used products are refurbished and used over a long time.

“I couldn’t supply clothes that had minor defects, so I had to throw away 300 to 400 dresses at once. I felt skeptical - ‘Am I a person who makes garbage?’ - so I stopped before I became addicted to money,” she said.

For Yoo, design is not just a way to allure customers, it also protects items from being mindlessly dumped. The shops’ accessories, made with glass bottles, and bags made from used clothes are beautifully reinvented and popular among customers.

These so-called culture designers utilize their experience and expertise to come up with creative ideas for the public good. They may not make national headlines or appear on television, but their passion and talent have had a positive impact on society.

Kim Young-min, for instance, renovated an abandoned house into a village playground after he moved from Seoul to Jeju Island in 2010.

Back then, the 36-year-old was a farm worker, earning 600,000 won a month. In 2013, he started finding and meeting with the owners of long-abandoned houses and was eventually approved for a free five-year lease. 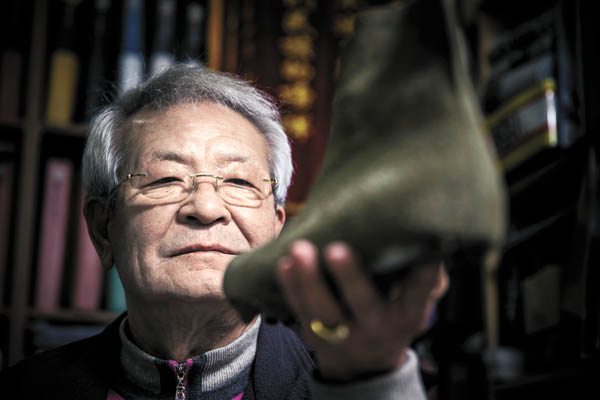 Namgoong Jeongbu, a 75-year-old cobbler, holds a specially tailored shoe he made. “I will keep developing elegant shoes for people with foot and ankle conditions,” he said. [PARK JONG-KEUN]

He took three months to repair the house using 100 million won that he collected from a crowd-funding campaign and eventually opened the property to others looking to revive dilapidated residences.

“The moment a house catches attention, it can be born again,” Kim said, adding that queries from architecture students and residents have increased.

Similarly, Namgoong Jeongbu overcame the odds to follow his passion. For the 75-year-old shoemaker a newly acquired disability didn’t serve as an obstacle, but a turning point, in 1996, when he lost his right arm in a subway accident. “At first, I thought my life had ended,” he said. “But afterward, I could truly understand people with disabilities.”

Afterward, he started to make special shoes for people suffering from foot and ankle conditions, including arthritis. In 20 years, he has crafted 100,000 pairs of shoes, all specially customized for his loyal customers.

And after carrying out an eight-year campaign to introduce a bill for special orthopedic shoes to be covered by health insurance, his crusade finally paid off in 2005.

“My goal is to educate disabled people to become special shoes designers,” Namgoong said. “I want to help pave the way for people with similar handicaps to be self-sufficient.”

Like Yoo, illustrator Kang Ju-hye is also a culture designer and uses her disability to influence her creations. 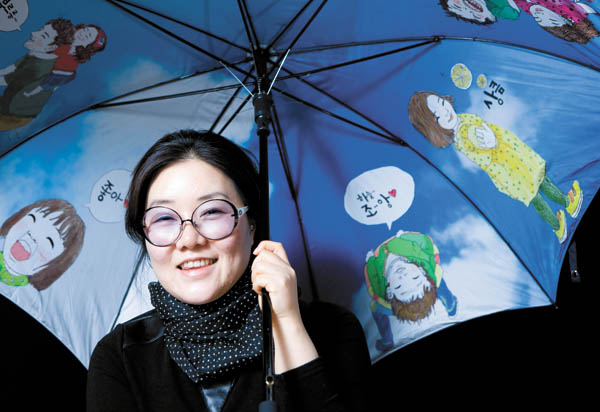 Illustrator Kang Ju-hye holds up an umbrella with her drawings. Her motto, “Beautiful, positive,” has helped her overcome hardships. [KWON HYUK-JAE]

The right side of her body was paralyzed after she was nearly killed by a drunken driver in 2003, but her passion for drawing only grew.

She is blind in her right eye and can only catch dim glimpses in her left, making all of her paintings tilted by 5 degrees.

“I had to draw and redraw, and I cried so many times,” she said. “But I think the tilted style is a unique attraction to my paintings.”

Kang held her first exhibition in 2013 and has since illustrated two published books.

Chung Myung-jin, CEO of Soap Companion, an organic soap manufacturer, has carried on with the campaign “Buy One, Give One” since 2013. The company donates the same number of soaps it sells to children in developing nations.

Chung, a former foreign affairs officer, was dispatched to Haiti in 2010, when a catastrophic 7.0-magnitude earthquake hit the country. The experience was a turning point for him, so he quit his government job in 2013 to become a relief activist.

While traveling in Cambodia and Rwanda, he noticed how rapidly disease spread due to a lack of knowledge about personal hygiene.

“Most sicknesses come from the dirty water, which spreads illness,” he said. “That’s the reason why hand-washing education is vital even though it sounds so trivial.”

Over three years, he taught some 3,000 people in underdeveloped nations about the importance of cleanliness and hand-washing and how to make soaps.

“I can never forget the letters from the women in Indonesia,” Chung said, referring to the thank you letters he received from the ladies who earned money selling soap. “I cried a lot. I was so proud of them for striving to support themselves and not just relying on relief supplies.”