At CES in Vegas, cars are main attraction

At CES in Vegas, cars are main attraction

Left: An LG Electronics dishwasher is poised to unveil at the 2016 Consumer Electronics Show under its new premium brand Signature. Right:Samsung Electronics will showcase a TV that has a quantum-dot display and GAIA, a new “three-layer security solution” for its range of smart TVs. [JOONGANG ILBO]

Televisions and home appliances have been the key products at the annual Consumer Electronics Show (CES) in Las Vegas. Make way for the wheels: As technology gets more important in vehicles, smart cars are stretching their presence at the world’s largest IT show, which kicks off on Jan. 6.

his year’s show will feature 115 automakers and car parts producers, 25 percent more than a year ago. The carmakers number nine. Korea’s second-largest automaker Kia Motors is holding a press conference at the show for the first time. Two of eight keynote speakers at the show come from vehicle producers: Dr. Herbert Diess, Volkswagen’s head of passenger cars, and General Motors CEO Mary Barra.

The Volkswagen executive will unveil an electric vehicle (EV) that will illustrate the synergy between the Internet of Things (IoT) and the automotive industry, four months after its diesel scandal seriously damaged the company’s credibility and market value.

A show within a show, automotive exhibits will cover more than 200,000 net square feet of exhibit space, a 25 percent increase from the 2015 CES, the show said in a release. The latest auto-tech trends will be shown from parking assistance, collision avoidance and emergency braking to the latest in driverless, electric and energy-efficient vehicles, it added. 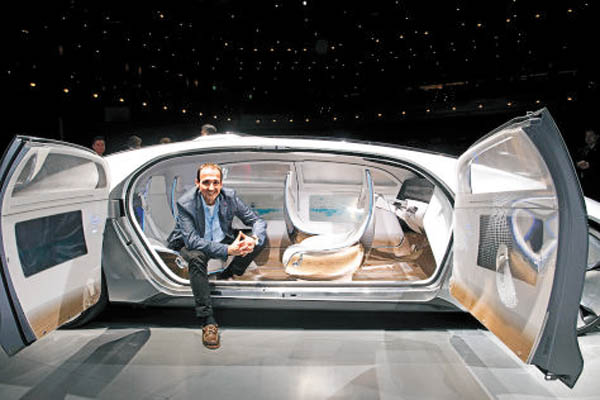 Mercedes-Benz shows off a futuristic autonomous car that can speed along without a human driver at the wheel at CES 2015. More carmakers are set to show products at the 2016 edition. [JOONGANG ILBO]

Kia has promised to detail its “vision and road map for fully autonomous vehicles” and to demonstrate that vision with its Kia Soul EVs. Kia and its sister company Hyundai Motor were granted a license by the state of Nevada in the United States on Dec. 14 to operate a fully-autonomous Kia Soul EV and the world’s first autonomous hydrogen-fuel cell vehicle.

“We used to end up displaying simple IT convergence technologies at the CES,” said a Kia spokesman. “This time we intend to promote the autopilot technology developed by the Hyundai Motor Group.”

IoT, which connects everything to the cloud and to mobile apps, has been a frequent topic at past renditions of the CES but companies are now set to show off some practical products that have adopted biosensors, remote security and home automation functionalities. Visitors may see robots with IoT sensors that serve as the central nervous system of homes, for instance. 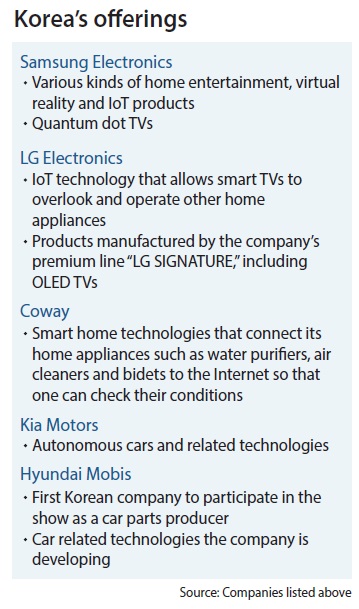 Cutting-edge virtual reality products such as Oculus Rift, HTC Vive and Sony PlayStation VR will send visitors to places they never thought were possible to visit. Virtual reality is on the cusp of becoming the biggest trend in computing in 2016.

Exhibits of drones will take up twice as much space as they did a year before.

Reversing rumors that it will unveil a Galaxy S7 and S7 Edge, successors to S6 Edge Plus, at the four-day event in Vegas, Samsung Electronics is only expected to showcase its next-generation high-definition TV, which uses quantum-dot technology. Quantum dot refers to a material that is able to deliver colors that are more faithful to the original image.

The tech giant will also unveil a new “three-layer security solution” called GAIA for its range of smart TVs, with the goal of securing information stored on the devices and data transmitted “between the TV and [IoT] service servers.”

LG Electronics, the world’s second-largest TV producer, will try to outdo rival Samsung with a partly-rollable TV sized between 70 and 100 inches, according to industry insiders.