Conglomerates to innovate through uncertainty

Conglomerates to innovate through uncertainty 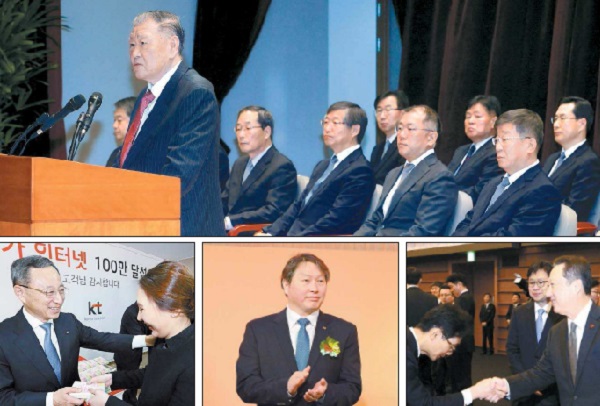 Business leaders celebrate the beginning of 2016 in their own special ways. Counterclockwise from top: Hyundai Motor Group Chairman Chung Mong-koo speaks on the leading Korean automaker’s business strategy at the company’s headquarters in Yangjae-dong, southern Seoul; KT Chairman Hwang Chang-gyu hands out rice cakes to employees to celebrate the one millionth Olleh GiGA Internet service subscriber at the company’s branch office in Bundang District, Gyeonggi; SK Group Chairman Chey Tae-won celebrates the company’s New Year’s event, which was his first since he was pardoned last year, at the Walkerhill Hotel in Gwangjang-dong, eastern Seoul; and Park Yong-maan, chairman of Doosan Group and the Korea Chamber of Commerce & Industry (KCCI), starts the beginning of the year at the KCCI office in central Seoul. [NEWSIS, KT]

The heads of major conglomerates named “preemptive transformation and innovation” as key to their survival in the new year, as uncertainties in the global economy are set to linger.

As companies nationwide kicked off their business operations for 2016 on Monday, their leaders carried out the tradition of delivering New Year’s addresses at commencement ceremonies.

“Boundaries between industries such as fintech, mobile and health are breaking down,” said Kwon Oh-hyun, vice chairman of Samsung Electronics, in front of some 500 executives and employees.

“We should compete in ways that we have never experienced before,” he added, predicting that low growth across the globe will continue and financial risks in emerging economies may turn into an even bigger crisis.

Competition related to Samsung’s key products, including smartphones, televisions and memory chips, will intensify as the IT industry transforms quickly, noted the top manager overseeing the semiconductor and display sectors at the tech giant.

“Innovative business models such as on-demand services and the shared economy are undermining the value of hardware and diverting the foundation of the competition to software and platforms,” he said, “We should be equipped with the capacity and systems to spearhead the renewed playing field.”

Jay Y. Lee, the vice chairman and heir apparent to the bedridden Chairman Lee Kun-hee, chose not to preside over the commencement ceremony and instead took a tour around key manufacturing facilities of Samsung Electronics and its related affiliates to hear about their business goals and action plans for the New Year. Today, he is scheduled to meet with CEOs at the group’s financial, construction and shipbuilding arms.

Before being hospitalized after a heart attack in May 2014, the chairman maintained the tradition of giving a New Year’s speech in the presence of employees, as is customary for conglomerate heads.

There was a sense of crisis at LG Group, with Chairman Koo Bon-moo ordering “fundamental and preemptive transformation to overcome crisis and sustain growth” in his address.

Upgrading business structures, innovating methods of conducting business and strictly carrying out decisions will be the management strategies this year, he noted.

Hyundai Motor Group, the country’s second-largest conglomerate, stressed the importance of the “basics.”

“We need to beef up our investment in R&D so that we can lead the auto industry in technological innovation,” Chung said in a speech at the group’s headquarters in Yangjae-dong, southern Seoul. “This year, the overall structure of the auto industry will change as the trend of car and IT convergence will extend even more. In the meantime, the world economy will see low growth due to unstable economic conditions, including low international oil prices and the interest rate hike in the United States, all of which are reasons to focus on improving our capabilities in car manufacturing.”

Local automakers are predicted to see the toughest year yet in both local and export markets. At home, one out of every six cars on the road is an import by brands like BMW, Mercedes-Benz and Toyota, which have planned to roll out a total of about 40 new cars this year.

At SK Group, the third-largest conglomerate, Chairman Chey Tae-won broke a week of silence to show up at the commencement ceremony held Monday morning at the Walkerhill Hotel in Gwangjin District, eastern Seoul, in the presence of some 500 executives.

It marked his first official public appearance after making a surprise confession on Dec. 29, through a letter to a local daily, about his years-long extramarital relationship and love child. The group did not notify reporters that he would show up until half an hour before the event, likely because of the media frenzy that has surrounded the chairman since the scandal broke.

“I am worried that the management environment in and out of the country is expected to be quite unclear this year,” he said in an address, “but I will turn risk into opportunity through mettle, and through this, I wish to contribute to the national economy.”

He also pledged to concentrate on “maximizing social value and returning the benefits” the conglomerate has received so far, but avoided answering questions about his scandal.

Manufacturers are poised to complete their restructuring in the Year of the Monkey. Top steelmaker Posco said it aims to improve the company’s overall financial structures, work that the company has been undertaking since last year due to the slumping industry.

“It seems like the environment surrounding us will get worse this year,” said Chairman Kwon Oh-joon at the company’s headquarters in Pohang, North Gyeongsang. “We need to work on improving our [business] operation structures so that we can save more money.”

“We made some unexpected losses as some clients refused to take over a completed semi-submersible drill ship and offshore plant works,” HHI CEO and President Kwon Oh-gap said in his speech. “In order to overcome such hardships, each business division must have its own competitiveness and must be able to take all responsibility for its work.”

Chairman Kim Seung-youn of Hanwha Group said he expects all four of the companies that the 10th-largest conglomerate acquired from Samsung Group last year to run smoothly in the new year.

“We need to enlarge synergy between defense and other businesses, and should be No. 1 in the solar power sector,” the chairman said.

Hanjin Group Chairman Cho Yang-ho set the goal of building the foundation for generating profits on a stable basis amid a slew of risky external factors.

Tech companies, which are being faced with increasingly formidable Chinese players, vowed to speed up their adaptation to the ever-changing industry landscape.

SK Telecom President and CEO Jang Dong-hyun called for accelerated transformation to keep up with the fast-changing industry landscape.

He cited the integration of different media and the concept of the Internet of Things with existing technology. Fields such as finance-related technology and connected cars were also chosen as target areas.

The New Year’s message by the CEO of LG U+ also drew a great deal of attention as the telecommunications provider appointed a new CEO at the end of last year.

Kwon Young-soo, who formerly served as president of LG Chem, now heads LG’s telecom unit, the smallest carrier after SK Telecom and KT. Kwon, however, promised to become the top telecom company in the country.

“Despite constant efforts, there is still a long way to go for us to become the No. 1 player,” Kwon said, “But we need to break down old traditions and bring in radical changes [in order to achieve the goal].”

Meanwhile, Chairman Shin Dong-bin of Lotte Group, which was embroiled in an embarrassing family feud last year that exposed its poor corporate governance, promised to become “a respected company that observes the rule of law.”