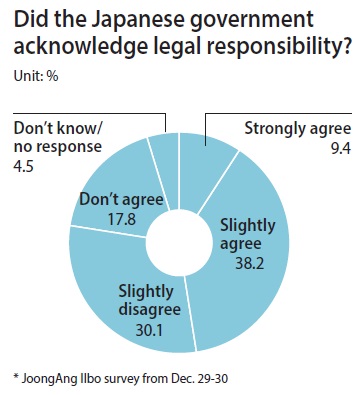 Koreans are generally divided on whether they believe the Japanese government has acknowledged legal responsibility for sexually enslaving thousands of young women and girls into military brothels during World War II, a recent survey showed.

According to a New Year’s survey conducted by the JoongAng Ilbo, 47.6 percent of respondents agreed with the Korean government’s position that the Japanese government had, in actuality, acknowledged legal responsibility in the landmark deal reached on Dec. 28 between Seoul and Tokyo, while 47.9 percent did not agree.

The landmark agreement promised an apology from the Japanese government and a multimillion-dollar fund for the Korean women forced into Japanese military brothels during the war, who are euphemistically known as “comfort women.”

Alternately, 4.5 percent said they “did not know” or did not respond.

The newspaper conducted a nationwide telephone survey of 1,000 people over age 19 between Dec. 29 and 30. There was a margin of error of plus or minus 3.1 percent and a 95 percent level of confidence.

Older people surveyed were more likely to think Japan had acknowledged legal responsibility, with 57.6 percent of respondents in their 50s and 65.5 percent in their 60s agreeing with the Korean government’s stance.

Their reactions came after the conclusion of the deal, negotiated by Korea and Japan’s foreign ministers, which includes an apology from Japanese Prime Minister Shinzo Abe and a plan to establish a fund for the victims using 1 billion yen ($8.3 million) of Japan’s state budget.

The Japanese government acknowledged that it bears “responsibility” for the comfort women issue, which “severely injured the honor and dignity of many women, with the involvement of its military” - more than it has ever conceded in the past.

The two sides also agreed that the settlement is “final and irreversible,” as long as Japan faithfully follows through with its promises.

There was some backlash, however, that the agreement stopped short of Japan fully acknowledging legal responsibility.

More than half of respondents, or 58.2 percent, responded they “did not agree” with the notion that this deal had settled the comfort women issue finally and irreversibly, while 37.3 percent of those surveyed said they did agree.

Of the respondents, those older than 60 had the most positive response, with 57.9 percent being content with the agreement.

On whether the Korean government should make an effort toward moving the comfort woman statue that currently stands in front of the Japanese Embassy in central Seoul - a symbol of the victims’ cause - 74.4 percent of all respondents were opposed. Conversely, 23.3 percent supported the Korean government working to relocate the statue.

Tokyo has called for the removal of the bronze monument of a young, short-haired girl wearing traditional dress, which was erected in 2011.

The survivors and the civic organizations representing them have refused to remove the statue, which has become an international symbol of Japan’s brutal wartime crimes.

In the bilateral agreement last week, the Korean government said that it acknowledged Japan’s concerns and would speak with concerned civic organizations; however, it has not agreed to remove the statue.

More than three-fourths of the people surveyed were also not convinced of the sincerity of Japanese Prime Minister Shinzo Abe’s apology. Only 21.5 percent of respondents said they believed Abe’s apology was sincere, while 76.6 percent said they did not feel it was genuine.