13 pavilions that had a purpose - but lost it

13 pavilions that had a purpose - but lost it 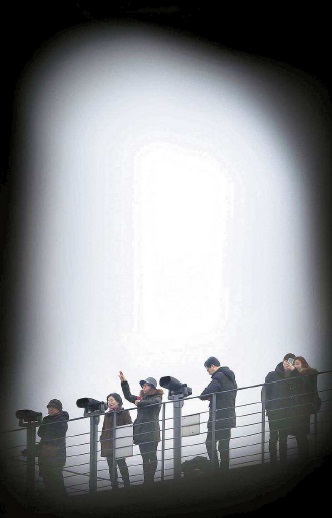 People visiting an observatory at Imjingak in Paju, Gyeonggi, on Sunday look into North Korea and take photos. [OH JONG-TAEK]

On Christmas Eve, the Goseong Unification Observatory, the closest place where people in South Korea can view Mount Kumgang, was like a North Korean liquor shop.

The two-story observatory building should have been filled with exhibits that help visitors understand the idea of unification of the Korean Peninsula. That was its original purpose.

But on the afternoon of Christmas Eve, the observatory, which is 16 kilometers (10 miles) away from Mount Kumgang, had only 20 to 30 visitors. There were no exhibits to look at. Vendors were touting local foods and rare North Korean alcoholic liquors.

“It is like a shopping center for North Korean booze rather than a unification observatory,” said Kim Joon-tae, 16, who was visiting with his father.

“I don’t know why they are selling North Korean liquor here instead of showing displays related to unification,” said Lee Keun-jae and Jang Ko-hee, a couple in their 40s. “I’m glad that we didn’t bring our daughter.”

The unification observatory in South Korea’s northernmost Goseong County, Gangwon, was built in 1983 and was the first observatory offering a view of the North. It served as a symbol of unification education for more than 30 years.

But poor management has turned it into a dreary place that barely knows its purpose anymore.

“We have an hourly guide to show North Korea’s landscape,” an official at the observatory claimed. But no guide showed up the day a JoongAng Ilbo reporter visited.

One of the officials explained that the vendors will move into a new building by December, and then the halls will have exhibits related to North and South Korea’s unification.

A unification pavilion in Cheongju, North Chungcheong, which is under the management of the city government, was similar to the one in Goseong. It had outdated exhibits and video materials.

The center, built in 1993, has been incorporated into Cheongju Land, a city amusement park, since 2007.

“Around 330,000 people come to our park annually, but I have no idea how many people drop by the unification pavilions,” an official at Cheongju Land told the JoongAng Ilbo.

“I don’t know if I am in an anticommunist center or a unification pavilion,” said Kim So-yeon, 34.

A Unification Ministry official said the last update to the exhibition center was to add President Park Geun-hye’s policy toward North Korea and unification in July 2013.

The ministry will discuss with local governments by March whether they will abolish a few unification pavilions and establish new buildings in other areas. It is also mulling over the possibility of having a fixed curator at the centers to continue updating exhibits.

“We plan to run systematic programs that can increase the effectiveness of unification education,” said Lee Keum-soon, president of the Institute for Unification Education.