Abandoning one political journey to start on another

Abandoning one political journey to start on another 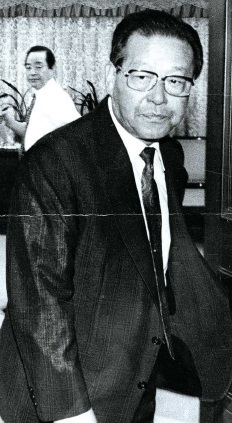 President Kim Young-sam named Hwang In-seng as the first prime minister in his administration upon my recommendation. I knew Hwang from my own days serving as prime minister under the Park Chung Hee government. He was my chief of staff at the time, so I knew how thorough he was when it came to management.

Kim’s decision to appoint Hwang was in keeping with the promises he made to me in exchange for my endorsing his presidential bid in 1992. I asked him to find someone from my party to serve as prime minister and build a memorial hall for Park Chung Hee. I also requested that he manage state affairs with respect to the National Assembly in return for my support. Kim kept just one promise - picking an official from my party for prime minister - while reneging on the other two.

In addition to dismissing the construction of a memorial hall, Kim began to make remarks critical of the former president. And rather than try to compromise with parliament, he pushed his government in a dogmatic way without listening to outside advice. I noticed his penchant for unilateral governance during my weekly one-on-one meetings with him at the Blue House. 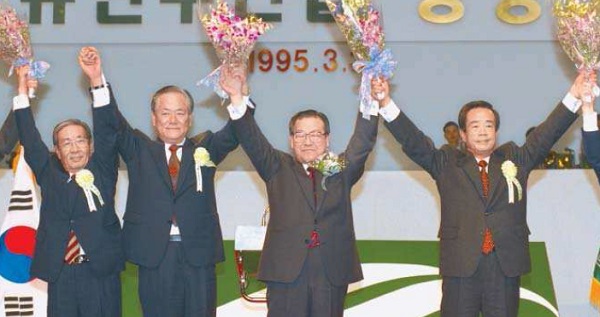 Kim Jong-pil, second from right, celebrates the founding of the United Liberal Democrats on March 30, 1995, after having left the ruling party about a month before. [JOONGANG PHOTO]

While Kim should be credited for dissolving the Hanahoi, Chun Doo Hwan’s faction of loyalists inside the military, and bringing Chun and former President Roh Tae-woo to justice, I found many of his national agendas to be populist. Instead of consulting with political experts and listening to public sentiment, he would often scold his critics.

“Stop your nonsense,” he would say.

When a person becomes a president, he or she will see the vast power vested in the job. A president commands information from the military and government sources and takes over the administration.

He or she can also sway influence in the judiciary, appointing the chief justice of the Supreme Court. Once in the Blue House, a whole different world unfolds, and it’s all too easy for a president to ignore outside advice and become vulnerable to high-handedness.

I tried to back Kim as much as I could, and when he declared a real-name financial system, I pledged my full support.

But the people who had followed Kim Young-sam for years were eager to downplay my role and responsibility in the ruling Democratic Freedom Party, and Choi Hyung-woo stood on the forefront of those efforts.

Like Kim, Choi had to put others down to gain more power, and on many occasions, he would rebuke my political comments. When I said that the government shouldn’t be in such a hurry to implement reforms, he immediately refuted it, claiming that the Kim administration needed to carry out all of its reform initiatives in its first six months. When he served as home affairs minister, he called for the party’s leadership to be dissolved - a direct jab at me.

Rumors also came out of the party that I was about to step down from my position, and those rumors were often reported to the press. Others in the party started demanding that our standards become more globalized.

Yet, that was just another way of applying pressure on me.

As the attacks intensified, I asked myself whether I should continue to share my political journey with Kim or stop altogether. Lawmakers’ calls for the globalization of the party were, in actuality, a couched demand for my resignation. That way, the politicians with ties to the president could tighten their grip on power.

I ultimately came to the conclusion that my political drama with Kim had come to an end.

On Jan. 10, 1995, I met with Kim at the Blue House, where he said that in order to reform the party, it should move to elect a party chairman through a primary. It was his indirect way of telling me that I should step down.

I told him what I had been thinking over the past few days. “After contemplating the situation, I have decided to leave the party,” I said.

Kim appeared surprised and asked me what I planned to do.

“My political plan shouldn’t matter much,” I responded.

In his memoir [published in 2001], Kim recalled his meeting with me that day and lamented that he did not visit my house to persuade me to change my mind.

“If I had visited his house and explained my intentions, he wouldn’t have left the party,” he wrote.

But though he thought he could have changed my mind, I was resolute. I had the ultimate goal of moving the country toward the completion of a parliamentary system.

“Over the past two years, I have once again seen the peril inherent in investing too much power in the presidency,” I declared. “To fix this fundamental problem, I will from now on work hard to realize a full parliamentary system.”

Introducing the parliamentary system had become my most important political objective after 50 years assisting Park Chung Hee and Kim Young-sam, during which I witnessed power sucked away from all corners of the government.

It is too easy for a president to become arrogant and authoritarian once he or she has a taste of the sweetness of power. The current single five-year term adds to this problem because it doesn’t allow constituents to deliver judgment on the incumbent since a president cannot be re-elected.

Constrained by a single term, it’s impossible for the government to lay out a long-term blueprint for national development. Due to these limits, every president - without exception - has become a lame duck in their final year.

The time has now come for Korea to adopt a parliamentary system so that lawmakers and politicians may better meet public demand. That way, we can resolve the gridlock that has become so normal among political parties under the current system.