The prospects for the unification of North and South Korea are not particularly high, according to a recent JoongAng Ilbo survey, which showed that the younger generation had a more dismal outlook on the issue.

In the report, 47.3 percent of the people questioned said that the two Koreas would one day be unified, while 48.9 percent said that it wouldn’t happen.

The younger generation had a more pessimistic outlook on the prospects for unification, with only about one-third of those between the ages of 19 and 29, or 32 percent, responding that the peninsula would be united in the future. By comparison, 55.8 percent of respondents in their 50s believed in the possibility of unification.

The newspaper conducted its nationwide New Year’s survey by phone from Dec. 29 to 30, questioning 1,000 people over age 19 on a range of topics, from the likelihood of unification to top government priorities and who had the most support as the country’s next president. 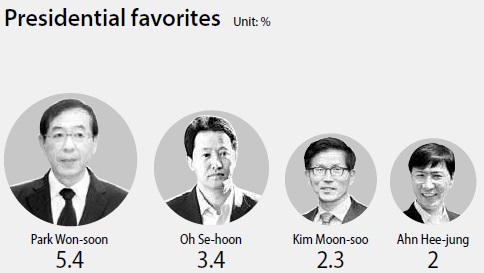 The public generally favored a summit between North Korean leader Kim Jong-un and President Park Geun-hye. However, 63 percent of respondents said that while inter-Korean talks would be ideal, it doesn’t need to be forced.

Just one-fifth, or 22.5 percent, said such talks should definitely be pushed for this year, while 13.1 percent said that a leaders’ summit wasn’t needed at all.

Most respondents didn’t think reunification would come any time soon, with only 8.9 percent saying it could happen within five years, 21.8 percent estimating between six to 10 years and 32.4 percent estimating between 11 and 20 years. More than a third, or 36.8 percent of total respondents, said it will take more than 20 years for reunification to occur.

“As the differences between North and South Korea continue to grow, the younger the generation, the more negative a perception of unification they tend to have,” said Koh Yu-hwan, a North Korean studies professor at Dongguk University. 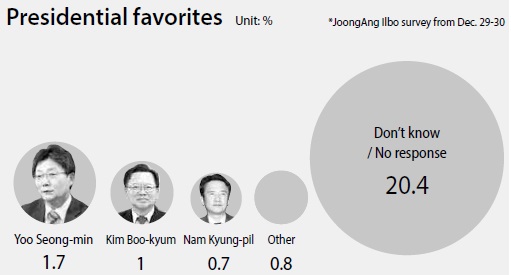 Respondents also weighed in on more immediate concerns, such as the top issues President Park must solve this year. Job creation came in as a top concern among 41.2 percent of respondents - regardless of age or region.

This was followed by eradicating corruption, with 18.2 percent, expanding welfare and alleviating polarization with 14.3 percent and labor reforms at 11.4 percent.

The call for job creation was even higher in the older age brackets; 52.4 percent of respondents in their 50s and 44.9 percent of people in their 60s or older considered it the president’s most important task.

By comparison, 38.1 percent of people surveyed in their 20s, and 32.9 percent of respondents in their 30s, selected job creation as the government’s top priority.

Less than half, or 42.5 percent of respondents, thought President Park was doing a good job managing state affairs, while 47.1 percent said she was “not doing a good job.”

The survey also showed that United Nations Secretary General Ban Ki-moon had the most support to be the country’s next president, with 35.4 percent, followed by ruling Saenuri Party Chairman Kim Moo-sung, with 10.5 percent, and Moon Jae-in, the chairman of the Minjoo Party of Korea, formerly the New Politics Alliance for Democracy, with 9.2 percent. Independent lawmaker Ahn Cheol-soo, who defected from the main opposition party last month, came in with 7.3 percent.

Excluding Ban, Kim had the most support as a presidential favorite, with 16 percent, followed by Ahn with 14.3 percent and Moon with 11.7 percent. When asked, “In order to prevent a ruling party monopoly, would you choose an opposition candidate?” in the 2016 general elections, 41 percent of respondents said they would; 32.2 percent, on the other hand, said they would “pick a ruling party candidate for national stability.”

Additionally, only 12.1 percent of respondents said they expect the economy to improve in 2016, while 44.7 percent thought it would “get worse.”