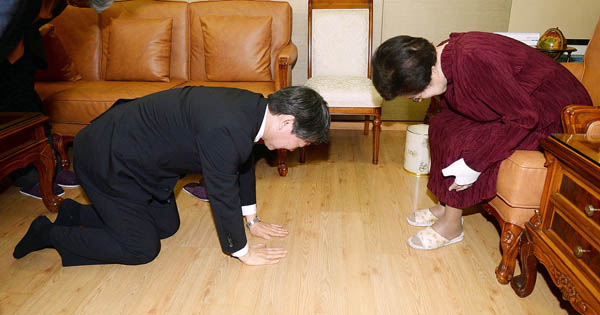 Rep. Ahn Cheol-soo, a political maverick who left the main opposition to start his own political party, has effectively won the endorsement of the widow to the late President Kim Dae-jung, one of the lawmaker’s associates told the JoongAng Ilbo on Tuesday.

Ahn paid a visit this week to Lee Hee-ho, 93, at her home in Donggyo-dong, western Seoul, to mark the New Year. During their talk, she expressed her support for Ahn, the JoongAng Ilbo reported Wednesday, quoting an associate who was present.

“I am hopeful for your accomplishments because you have made a strong appearance this time,” Lee was quoted as saying. “You must play a key role in changing the administration.”

The associate added that the 93-year-old had told Ahn she hoped his party will win many seats in April’s general election.

“I felt it would have been better if you were a little stronger, but you have shown a strong determination this time,” she said. “So I feel hopeful.”

The 53-year-old software tycoon-turned-politician ran for the presidency in 2012, competing against Moon Jae-in, the current chairman of the main opposition Minjoo Party of Korea, for liberal votes.

However, Moon continually outmaneuvered him, and Ahn bitterly dropped out of the race a month before the election. He was elected as a lawmaker in 2013 after a victory in the by-elections, in which he ran as an independent, and later co-founded the New Politics Alliance for Democracy (NPAD), the predecessor to the Minjoo Party.

After months stuck in a power struggle with Moon, Ahn left the NPAD in December and announced his plan to form his own political party by early February. A group of lawmakers, including Rep. Kim Han-gill, have since abandoned the main opposition party to join in his political experiment.

According to Ahn’s associate, the lawmaker told Lee that she must watch her health so that she may see him win the presidency in the next election in December 2017.

“Please change the administration. Please,” Lee was quoted as saying.

The former president’s residence in the Donggyo neighborhood has historical value for the people who fought for decades for the country’s democratization, the source said.

“Lee offered words of support to Ahn, so we are extremely grateful,” the associate added.

A group of veteran politicians, loyalists to the late president, reportedly took Lee’s message as an apparent signal to defect from the Minjoo Party. The group is known as the Donggyo-dong faction, named after the location of Kim Dae-jung’s residence, where he lived from 1963 until his death in 2009.

“Her remarks, though they may be simple, probably have profound meaning,” Rep. Park Jie-won, a three-term lawmaker who served as the presidential chief of staff for Kim in the Blue House, said in a radio interview on Tuesday. Park also hinted that he has nearly made up his mind to leave the Minjoo Party.

“Most of the Donggyo-dong faction are leaning toward leaving [the Minjoo Party],” said Kwon Rho-kap, a leader in the faction. “Many people have urged me to act fast, and I will announce my decision around Jan. 15.”

Lee Dong-sup, the former deputy secretary-general of the main opposition party who recently became Ahn’s political adviser, said that all the members of the Donggyo-dong faction have already made up their minds to join Ahn. “As soon as Kwon gives the sign, they will leave en masse,” he said.

The Donggyo-dong faction is known to have a strong influence over voters in the Gwangju and Jeolla regions.

Other local media reported that Ahn met with Lee Hee-ho for more than 20 minutes, while Moon, who visited Lee on New Year’s Day, met with her for just eight minutes.

The Minjoo Party reacted sensitively to the reports on Wednesday. “The late president’s son, Kim Hong-gul, contacted us this morning,” said Kim Sung-soo, a spokesman for the Minjoo Party. “He said he had checked with his mother about the reports and learned that they were not correct. The former first lady said she just listened to Ahn’s remarks and did not provide any special message.”

Other Minjoo leaders also defended Moon during their Supreme Council meeting. Rep. Jun Byung-hun claimed that the chairman had decided to cut short the meeting with Lee because she was wearing a cast on her arm. “We wanted her to rest, so we kept the talk brief,” he said. “It’s childish that the media is comparing the duration of both visits.”

Another Moon associate, Choo Mi-ae, added that there was no way Lee supported Ahn.

“She was the lifetime companion of the late president and she toured the country to campaign for him to win the presidency,” Choo said. “There is no way she is supporting the group that is attempting to destroy the party [Kim Dae-jung] built.”