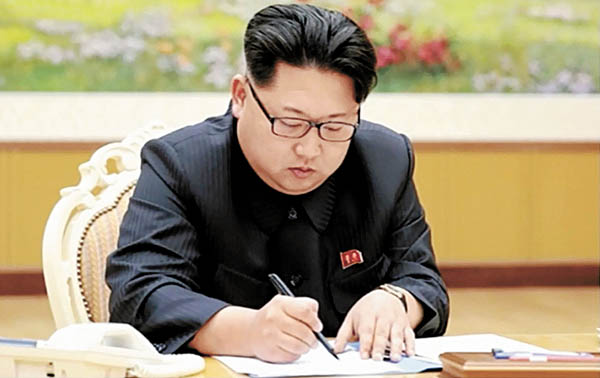 Pyongyang claimed to have successfully tested a hydrogen bomb Wednesday morning, and the regime’s fourth nuclear test over the past decade is expected to bring about serious repercussion from the international community.

According to a report on the state-run Korean Central Television at 12:30 p.m., North Korea announced that it “successfully tested the first hydrogen bomb at 10 a.m.[Pyongyang time],” after a massive tremor was detected in the country around three hours earlier by several international meteorological agencies.

Pyongyang’s report added that the test had “completely confirmed the accuracy of its technology” and proved that it was able to miniaturize an H-bomb, though such claims have yet to be proven.

It further said the test was a “self-defensive measure” against Washington, though it made no mention of South Korea.

It did not confirm the location of the detonation.

North Korean leader Kim Jong-un was said to have issued an order for the test on Dec. 12 and then issued a final command on Sunday, in what Pyongyang claims as another advancement in its nuclear ambitions.

South Korean intelligence and defense officials, however, said there is a possibility that what was tested may not have been a hydrogen bomb.

A seismic event was detected in North Korea earlier that morning near the Punggye-ri site in Kilju County, North Hamgyong Province, according to officials in Seoul.

The North has conducted three underground nuclear tests in 2006, 2009 and 2013 at the Punggye-ri nuclear test site.

The European Mediterranean Seismological Center and U.S. Geological Survey first detected a shallow earthquake with a magnitude of 5.1 in North Korea.

The Korea Meteorological Administration said the seismic activity had a magnitude of 4.8 at around 10:30 a.m. and initially said it could have had an artificial cause. 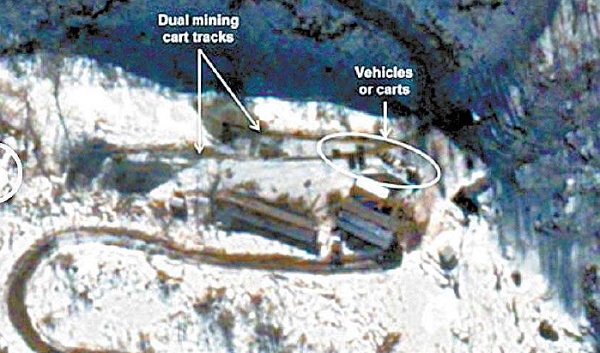 38 North, a North Korea watchers’ website, made public a satellite photo taken on Dec. 12 of the Punggye-ri nuclear test site. 38 North concluded that a new tunnel for a nuclear test was under construction. [NEWSIS]

Pyongyang did not notify Beijing or Washington, nor did it make an announcement before the test, unlike in the previous three occasions, apparently catching key countries involved in denuclearization talks with North Korea - also including South Korea, Japan and Russia - off guard. For the previous three tests, Beijing and Washington were warned in advance.

“North Korea will have to pay the corresponding price for this nuclear test,” Park warned, adding stern measures will be taken after close consultation with the international community.

“This is not only a serious provocation to our security but related to the survival of our people and our future,” she continued, “and is a frontal challenge to international peace and security.”

She added, “As this is North Korea’s fourth nuclear test, further analysis is needed. However, claiming that this nuclear test is a hydrogen bomb test in itself shakes the security topography of Northeast Asia and can change the fundamental nature of the North Korean nuclear issue.”

The South Korean government said it will maintain a posture ready for any further provocation by North Korea.

Cho Tae-yong, deputy director of the National Security Office, said in a statement, “The government strongly condemns that North Korea carried out a fourth nuclear test despite repeated warnings from South Korea and the international community, and in clear violation of UN Security Council resolutions.” 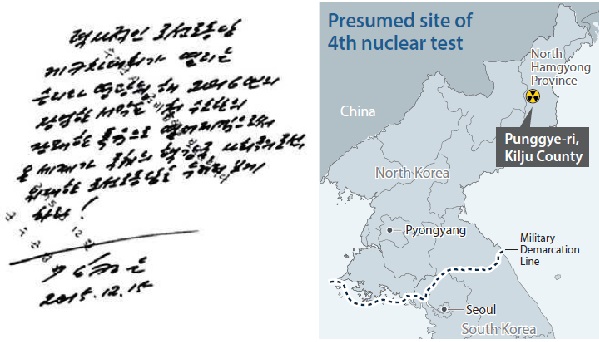 He went on to urge Pyongyang to “scrap all its nuclear weapons and ballistic missile programs completely, verifiably and irreversibly.”

U.S. Ambassador Mark Lippert and U.S. Forces Korea commander Gen. Curtis Scaparrotti held talks with Foreign Minister Yun at the government complex in central Seoul in a closed-door meeting later in the day to discuss joint measures between Seoul and Washington and multilaterally. Seoul is also in close cooperation with Beijing.

The international community was caught off guard, especially as leader Kim Jong-un’s recent New Year’s address focused on economic development of the country and toned down the military rhetoric. It did not even mention Pyongyang’s nuclear program, as was customary in previous addresses.

Some analysts in Seoul interpreted the address as an indication that North Korea was interested in improving ties with the international community, especially ahead of hosting a congress of the Workers’ Party in May for the first time in 36 years.

In December, North Korean leader Kim Jong-un claimed his country had the ability to detonate a hydrogen bomb. He was quoted by the Korean Central News Agency as saying that North Korea is “capable of producing hydrogen bombs alongside atomic bombs” during a visit to the Phyongchon Revolutionary Site on Dec. 9.

A hydrogen bomb, also known as a thermonuclear device, ignites a secondary nuclear fusion reaction that leads to a more powerful nuclear explosion than with an atomic bomb.

However, many domestic and international experts were skeptical of the H-bomb claim. In order to build an H-bomb, the North must have succeeded in miniaturizing an atomic bomb first, a technology the North is not known to have mastered.

While the North has repeatedly declared itself a nuclear-armed state, this was the first time a North Korean leader declared it was capable of producing hydrogen bombs.

The South’s National Intelligence Service (NIS) reported to the National Assembly’s Intelligence Committee that “while North Korea claims it is a hydrogen bomb, there is a possibility that it is not, based on [the magnitude of the seismic event].”

Ruling Saenuri Party Rep. Lee Cheol-woo, a member of the parliamentary Intelligence Committee, said that the NIS claimed that the yield of the nuclear devise tested on Wednesday was 6 kilotons, with a seismic wave of 4.8, based on the spy agency’s initial assessment.

A yield of 1 kiloton can be approximately compared to 1,000 TNT exploding simultaneously.

However, the yield of a hydrogen bomb should be closer to 100 kilotons, Lee pointed out.

In contrast, the nuclear device detonated in North Korea in 2013 was 7.9 kilotons, with a tremor of magnitude 4.9.

“Because the seismic wave is lower, it doesn’t appear to be an H-bomb,” the lawmaker said. He added if the test failed, there should be a yield of tens of kilotons for a hydrogen device.

But scientifically confirming what exactly was detonated on Wednesday, including a fill analysis of the seismic waves, is expected take time.

Kim Young-soo, North Korea and comparative politics professor at Sogang University, told the JoongAng Ilbo, “An H-bomb test is a strategy for Kim Jong-un to show North Korea will stick to its way in domestic and foreign policy and draw in Washington. It is also for propaganda for domestic unity ahead of the seventh congress.”

The White House said it could not confirm Pyongyang’s claims of a successful H-bomb test, though it acknowledged seismic activity in the country and said that it condemned any violation of UN Security Council resolutions.

“We are aware of seismic activity on the Korean Peninsula in the vicinity of a known North Korean nuclear test site and have seen Pyongyang’s claims of a nuclear test,” White House National Security Council spokesperson Ned Price said, adding that Washington is working in close coordination with its regional partners.

In a similar statement, U.S. State Department spokesman John Kirby said, “While we cannot confirm these claims at this time, we condemn any violation of UN Security Council resolutions and again call on North Korea to abide by its international obligations and commitments.”

The Chinese Foreign Ministry said it will lodge a protest with North Korean diplomats over its nuclear test.

Hua Chunying, the ministry’s spokesperson, said in a briefing that China “was not notified beforehand by North Korea” of the nuclear test, which it “firmly opposes.”

The UN Security Council plans to hold an emergency meeting.