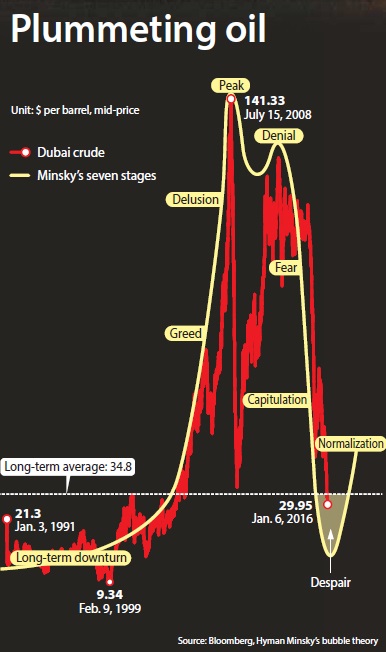 The international crude price fell below the $30 per-barrel mark on Wednesday in Dubai, United Arab Emirates, its lowest level in almost 12 years.

The Middle East market closed with the Dubai crude oil price plunging 7.25 percent to $29.95 per barrel, according to Bloomberg data. Other types of oil such as the West Texas Intermediate (WTI) and British Brent also dropped as much as 6 to 7 percent compared to the previous trading day.

Analysts usually call it a “plunge” when an asset price declines by 5 percent or more in a single trading day.

Major oil-producing countries including Venezuela are worried that the Dubai crude would plummet as low as $20 per barrel.

The global crude market has crumbled from an oversupply with production in both the United States and members of Organization of the Petroleum Exporting Countries (OPEC) remaining high.

Wednesday’s oil price was less than one-fourth the record $141.3 per barrel during the good old days from 2002 through 2008.

OPEC failed to reach an agreement to reduce production at the end of last year, and the intensified political conflict between Saudi Arabia and Iran will probably lead to greater crude production. Global demand has steadily declined, mainly due to the Chinese economic slowdown.

In the past, cheap crude was a blessing for economies like Korea.

The British think tank Oxford Economics wrote in a recent report that a plunge in the price of crude by $40 per barrel is the equivalent of giving global oil consumers a subsidy of $1.3 trillion - an amount equal to the Korean government’s budget for four years.

Slipping oil prices should help the economies of importing countries. Analysts say that every $20 cut in the price of oil should add 0.4 percentage point to an oil importer’s GDP growth within six to nine months.

However, the global market fears cheap oil this time around, resulting in stock indexes of major economies like the United States and Europe retreating in shock. Theoretically, cheap oil can reinvigorate an economy and help enhance manufacturers’ performances and their stock prices. In fact, exactly the opposite is happening.

The World Bank argued in a report written last January that the crude market has been “financialized,” saying that oil price trends matched those of equity prices, such as stocks, bonds and derivatives. This showed that the crude is not just an energy source, but a financial product and a gauge of economic health.

Since 2004, many global funds and investment banks have included crude oil and raw materials like copper into their asset baskets, according to the World Bank. If an asset’s value drops, the other assets’ prices are influenced.

Bassam Fattouh, the director of the Oxford Institute for Energy Studies, has argued that when oil prices plunge, they also bring down the prices of stocks or bonds.

Based on theories suggested by the late American economist Hyman Minsky, the crude oil price has entered a phase of despair. According to the Minsky theory, there are seven stages in a cycle in which an economic bubble forms and bursts: greed, delusion, a peak, denial of a downturn, fear, capitulation and despair.

MarketWatch, an economic news outlet, wrote Thursday that the crude oil price has been trapped in a “death spiral” due to the Saudi Arabia-Iran tension and the China slowdown.

Also historically, oil prices haven’t quickly recovered once they hit bottom, as in the 1990s when they went down to $9 per barrel.