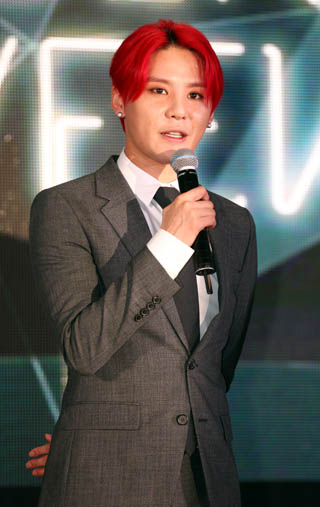 Kim Jun-su, a member of the K-pop trio JYJ, will bring charges against a number of Internet users who left malicious comments about him this week.

C-JeS Entertainment, the agency that represents Kim, said on Saturday that malicious comments online toward Kim have surged since his romantic relationship with singer Hani became public on Jan. 1.

A local entertainment daily ran an exclusive story on the first day of this year that the two singers have been seeing each other for six months and published some photos of the two on dates around Seoul.

The agencies of both Kim and Hani instantly confirmed their relationship after the news came out.

“We’ve found a few people who have been leaving malicious comments and groundless rumors on forums and Internet articles by using the same Internet IDs. We are in talks with our lawyer on whether we should bring charges against the commenters with the prosecutor’s office or the cyber bureau of the Gangnam Police Precinct,” the agency said in a press release.

This is not the first time C-JeS Entertainment has taken a firm stance on malicious comments on the Internet.

After actor Lee Jung-jae’s romantic relationship with Lim Se-ryeong, the eldest daughter of the chairman of Daesang Corporation, became public last January, the agency brought charges against 50 malicious commenters at the Supreme Prosecutors’ Office in November.

“We keep monitoring vicious comments about our artists and work hand in hand with the cyber bureau of the Gangnam Police Precinct,” the agency said.