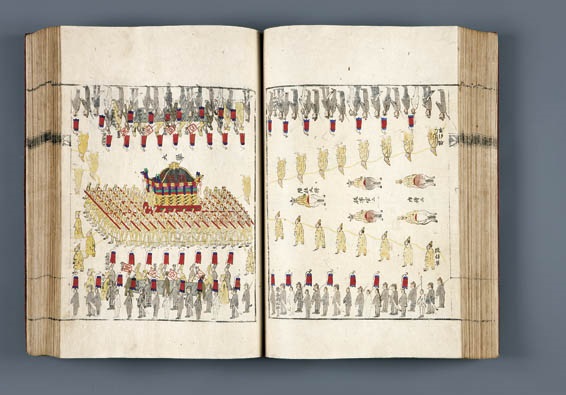 The Uigwe book that details the protocols for the funeral procession of Empress Myeongseong (1851-95), which took place in 1897.[CULTURAL HERITAGE ADMINISTRATION]

Record-keeping was a particular forte of Korea’s Joseon Dynasty (1392-1910). Case in point are the Uigwe books.

The government of Joseon left extremely detailed writings and drawings of the protocols for important rites and ceremonies at the royal court. These included enthronements, weddings, palace structure repairs, funerals, construction of royal tombs and memorials, and production of royal portraits, to name a few, from the preparation stage to the debriefing stage.

Historians say the Uigwe books represent a culture of documentation in ancient Korea. The books even include the names of the commoner craftsmen who took part in the rites and ceremonies despite Joseon being such a strictly hierarchical society. The drawings are equally detailed, not missing even the strand of hair on a horse, for instance.

By now, most Koreans have heard of the Uigwe books, as they made many headlines in 2011. It was that year that France returned a set of Uigwe books after keeping it for 145 years. French troops took the books from a royal archive called Oegyujanggak in Ganghwa Island, Incheon, during Byeongin-yango, the French invasion of Korea in 1866.

The Cultural Heritage Administration (CHA) announced on Dec. 31 that it plans to designate some of the books - kept at 13 institutions around Korea - as a national treasure after a monthlong review period.

This news might have come as a surprise. The Uigwe books of Joseon, which were added to Unesco’s Memory of the World register back in 2011, are not yet a state-designated treasure. 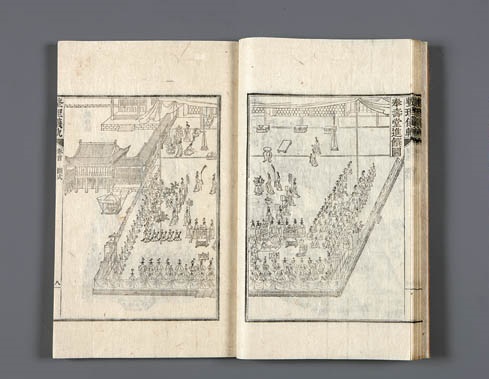 The Uigwe book that documents the protocols for the 1795 visit by King Jeongjo (1752-1800) and his mother, Lady Hyegyeong (1735-1815), to the Hwaseong Fortress in Suwon, Gyeonggi. [CULTURAL HERITAGE ADMINISTRATION]

“The Uigwe books are a unique case,” Chung Je-kyu, an expert on ancient documents and an outside adviser to the CHA, told the Korea JoongAng Daily.

He explained that in the case of the “Annals of the Joseon Dynasty,” which detail the history of the 500-year dynasty, a thorough study was done on its whereabouts and qualities before it was registered as a state treasure in the 1970s and then added to Unesco’s Memory of the World register in 1997.

But an in-depth investigation had not been done on the Uigwe books when they were added to the Unesco register back in 2011, when interest in the artifacts was high with the books’ repatriation from France. It was around that time that Korean experts began a thorough study. The Joseon government published many versions of the Uigwe books, and they all ended up scattered across the country.

“The study found that 22 institutions own versions of Uigwe books,” Chung said. “But we decided to recognize as a treasure 2,756 books kept at 13 institutions for now, based on the standards we’ve set.”

A special exhibition on the Uigwe books that France returned in 2011 took place at the Gwangju National Museum in 2012. [NEWSIS]

The standards are that the they have to be either the versions that were for the king’s eyes only, or the versions made to be distributed to government organizations and archives, and the intended destination must be clear.

The CHA also decided to exclude Uigwe books made after Japanese colonization (1910-1945) began, as well as those made to be distributed to individuals.

A disappointing result is that the set of Uigwe books returned from France will not be designated as state treasures, as they have been returned in the form of a lease. Therefore, France still technically owns the books.

What’s more, the five-year study failed to find any Uigwe books made before the Japanese invasion known as the Imjin War (1592-98). The Joseon Dynasty can be divided into periods before Imjin and after Imjin, as the war left indelible scars on the state, particularly destroying many historical buildings and documents.

“There is still a possibility,” Chung said. “That’s why we are taking a month for review. In early February, members of the Committee for Cultural Heritage will deliberate on any updates and announce the designation.”