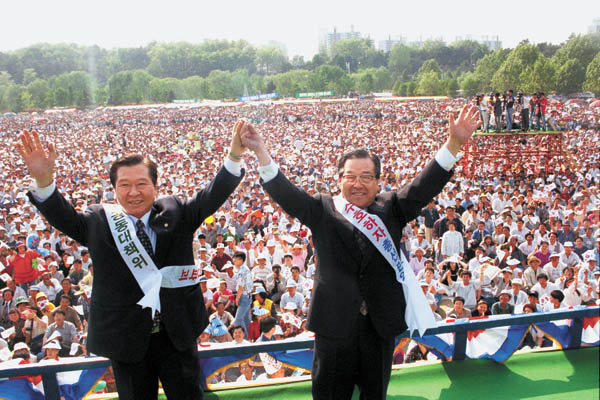 Kim Dae-jung, left, and Kim Jong-pil stand together at a rally on May 26, 1996, that effectively marked the beginning of their political alliance. [KIM JONG-PIL]

On Feb. 9, 1995, I declared that I was parting ways with President Kim Young-sam and left the ruling Democratic Freedom Party. My defection marked an end to a five-year partnership with the governing party that had been established via a three-way merger in January 1990.

I readied myself for a new political journey with a firm determination to uphold my principles.

Five ruling party lawmakers followed me in walking on this uncharted path. With them, I started working to form a new political party. In the process, more current and former lawmakers joined us, including former Assembly Speaker Park Jun-gyu, whose political background was markedly different. 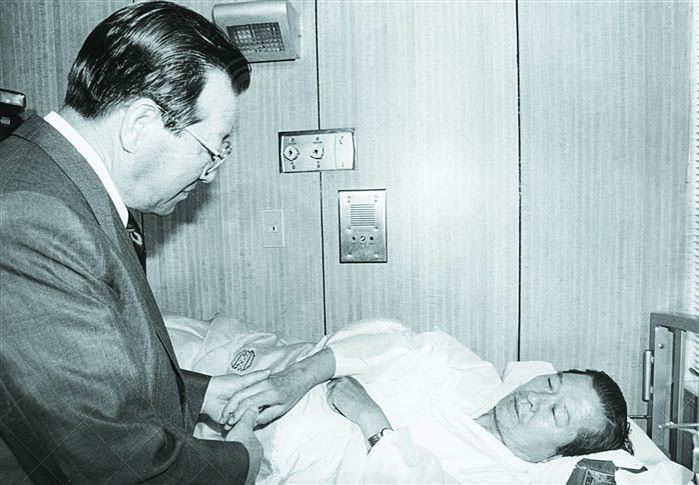 Kim Jong-pil, the leader of the ruling Democratic Freedom Party, visits Kim Dae-jung, who on Oct. 17, 1990, was on a hunger strike to demand the government drop its plan to revise the Constitution. [JOONGANG PHOTO]

As a veteran lawmaker from the Gyeongsang region, he often clashed with me over political agendas. Park Chul-un, who was at the forefront of the campaign against Kim Young-sam during the presidential race, also joined my efforts for a new party.

The composition of the United Liberal Democrats (ULD) was diverse. Those who joined in its foundation came from all walks of life and all sides of the political spectrum.

The politicians who felt ignored by Kim Young-sam and his supporters, as well as those who had served in the previous military governments but later lost their standing, came to seek my help. Those who simply wanted to get into politics also joined me.

I welcomed them all, as it was in accordance with my principles that I accept anyone seeking help; and I did not try to stop anyone who wanted to leave.

There were many critics when it came to my endeavors to form a new party. But I likened my efforts to the formation of an ocean. The ocean has all qualities of water, clean and dirty, but it must embrace it all to be vast.

I stood with the firm conviction that I must go my own way no matter what. I embraced those disgruntled with Kim to better organize the party structure.

Our first big test was the June regional election, which would decide our fate, and many people remained skeptical of our chances for survival.

The emergence of the ULD represented the sentiment among Chungcheong voters that they had been alienated by the Kim government.

The ULD did well at the polls, winning three gubernatorial races, as well as the mayoral post for Daejeon. I interpreted the outcome as a reflection of the people’s growing frustration with the Kim Young-sam government’s dogmatic style of governing. And with that, my political standing was cemented.

Around that time, Kim Dae-jung, who had retired from politics upon his bitter defeat to Kim Young-sam in the 1992 election, made a comeback. Even though he initially declared that he was finished with politics, I had expected him to return, knowing how badly he had wanted the presidency.

At first, he helped Cho Soon in his campaign for Seoul mayor, though Kim initially denied that his assistance was an indicator of his plans to return to the political arena.

But after Cho won, Kim backpedaled, arguing that the result reflected the people’s desire for him to be back in the public eye.

In July 1995, he founded his own political party, which can be translated as the National Congress for New Politics, marking an end to his 31-month absence. Watching Kim flex his political muscle again, I thought, “Nobody can stop him; from now on, he is betting [on the presidency].”

Meanwhile, I was confronted with several hurdles in my political journey: A general election was scheduled in 1996 and it carried great importance.

The ULD continued to make strides, however, winning 50 seats - up from 29. Of those, eight came from North Gyeongsang. With a strong casting vote, the ULD emerged as a formidable political force, and I was elected to serve as an eight-term lawmaker, representing Buyeo County, South Chungcheong, where I was born.

Kim Dae-jung’s party did poorly, only managing to win 79 seats, but the combined number of seats between the two major opposition parties - mine and Kim Dae-jung’s - stood at 129, just 21 seats shy of a majority.

The ruling party, just 11 seats shy of a majority, soon intensified its efforts to lure away opposition lawmakers to gain the upper hand.

During my meeting with President Kim following the general election, I berated the ruling party’s strategy of trying to win over independent and opposition lawmakers. Kim shrugged off my complaint, arguing that he could not stop newly elected lawmakers from doing as they pleased.

So I again stressed the need to adopt a full parliamentary system. But still, Kim evaded my demand, claiming that such a system would not suit Korea’s political landscape and that it would spark rampant corruption.

His uncompromising stance led me to form a close alliance with Kim Dae-jung. In late May 1996, Kim and I held a joint rally in Seoul with both opposition parties.

“I never thought I would share the stage with Kim Jong-pil at a rally,” a surprised Kim said before the crowd.

“Over the past three decades,” I added, “Kim Dae-jung, who is standing right next to me, has contributed to the country’s growth.”

That scene, the two of us standing side by side, signified the beginning of a political coalition.

At the time, I didn’t fully grasp the implications for the future, and our alliance continued into the by-election in September that year.

The two parties did not field candidates to compete each other, and once fall came, I was asked by sources in Kim Dae-jung’s support base whether I would cooperate with him in 1997 presidential race.

In October, Kim said in an interview that he was willing to introduce a parliamentary system if it could bring about a political alliance among the opposition bloc.

It was his way of letting me know that he wanted to work with me.

On the evening of Dec. 1, 1996, I met with Kim Dae-jung at my relative’s house - an event that marked the beginning of our path toward winning the Blue House.