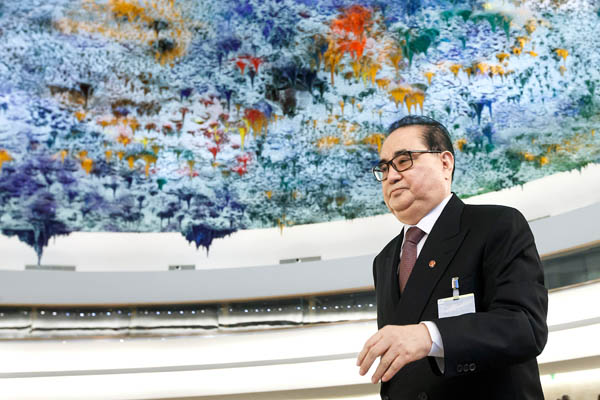 The veteran diplomat is scheduled to attend the so-called Davos Forum held from Jan. 20 to 23, according to South Korean government officials Tuesday. Ri’s trip should give insight into the direction of Pyongyang’s foreign affairs policies in the aftermath of the nuclear test last week, and the international community’s response.

This will be the first time in 18 years North Korea is sending a delegation to the annual forum in Davos, which brings together global political and business heavyweights. This year the forum has the theme of “The Fourth Industrial Revolution” and leaders of some countries are expected to attend.

Ri, who assumbed the post of foreign minister in April 2014, is expected to be accompanied by a delegation including Yun Yong-sok, a senior official in the State Economic Development Committee, according to government sources, and Ri has been put in charge of economics as well as foreign affairs by Kim.

A North Korea source told the JoongAng Ilbo on Tuesday, “Ri is one of the few key aids to Kim Jong-un who can always directly contact him.”

In a New Year’s address a few days before the nuclear test, North Korean leader Kim placed priority on economic growth and improvement of the livelihood of his people and less on North Korea’s military and ruling party.

Unlike in past years, Kim did not mention his policy of simultaneously pursuing nuclear development and economic strengthening, which seemed to indicate he might be trying to improve diplomatic relations with the outside world. Kim also said he is open to dialogue with South Korea. (This didn’t stop the country from launching a fourth nuclear test on Wednesday)

In Davos, Ri is expected to explain North Korea’s economic and investment policies to the international community ahead of its Workers’ Party’s upcoming congress. He is also likely to attempt to say North Korea welcomes foreign investment.

North Korea’s Workers’ Party in May will hold its seventh congress, the first in 36 years. Pyongyang is expected to need to showcase economic achievements clinched since Kim took power in late 2011 at the congress.

Ri was North Korean ambassador to Switzerland when Kim Jong-un was a student in the country and served as a guardian to the young North Korean leader during his overseas studies.

Compared to diplomatic heavyweight Kim Sok-ju, the elderly director of the Workers’ Party International Affairs Department who is reportedly bedridden, North Korea experts believe that Ri, who is talented with languages, is a breath of fresh air in foreign affairs.

Ri was last seen on the international stage in December at the UN Climate Change Conference in Paris, where he declared Kim Jong-un’s war against deforestation.

In Paris, he said Pyongyang would join global efforts to combat climate change and announced its aims to reducing the country’s total amount of greenhouse gas emissions by 37.4 percent compared with the levels of the 1990s.